Freezin’ for a reason: Eighth Polar Plunge a success 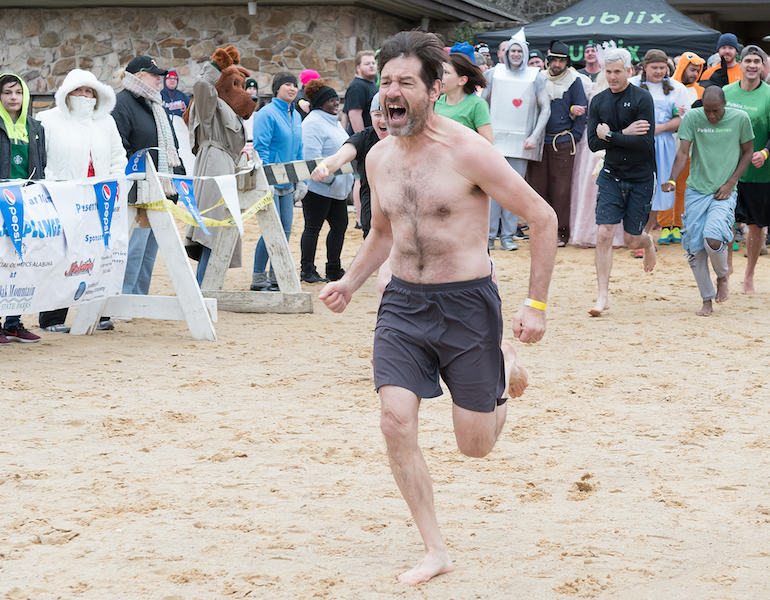 A man runs full speed into the frigid lake at Oak Mountain State Park during the Polar Plunge on Saturday, Jan. 13. (For the Reporter/Jeremy Raines)

Pittman was among more than 100 people who showed up to participate in the event, which serves as a fundraiser for Special Olympics of Alabama. The event drew participants from all over Shelby County and abroad.

Pittman said he was relieved to exit the water, but the relief was short-lived with the temperature that morning hovering around 29 degrees and winds blowing at about 10 mph.

Members of the Pelham Fire Department Water Rescue team were positioned in the water, suited up in immersion suits that helps maintain body temperature, ready to help plungers if needed. Other members of the team watched the water from a nearby boat and an ambulance was on standby.

Vendors, such as Publix Super Market, Starbucks and The Connection Church offered snacks and hot beverages to everyone in attendance. A large bonfire helped to keep everyone warm.

Despite the cold, Pittman said he had a great time at the event and is looking forward to participating again next year. However, plunger Star Gray said Saturday marked her first and last time taking the plunge.

“I’m here to raise money in support of a worthy cause,” Gray said. “I’m only jumping this one time but I will continue to support and donate to event.”

Prior to the plunge, a costume contest was held. Pelham Mayor Gary Waters came dressed as the biker from the group The Village People and Pelham City Council President Rick Hayes came dressed as a Birmingham Bulls hockey player. A group dressed as the characters from the Wizard of Oz took first place and the Publix dinosaur was named the runner up.

Special Olympics of Alabama, which has more than 14,000 athletes, provides year-round sports training and athletic competition in a variety of Olympic-type sports for children and adults with intellectual disabilities, according to their website. Currently they offer 20 different sports in the state of Alabama.
A large portion of the funding needed to operate these programs comes from fundraisers hosted by the Alabama law enforcement community. Several law enforcement agencies from Shelby County participated in the event.
The Polar Plunge kicked off fundraising efforts for the law enforcement community.
Pelham Police Department Communities Relations Coordinator Ainsley Allison estimated that the event raised roughly $13,000 for Special Olympics. Pelham Police Chief Larry Palmer said donations usually continue trickling in for the event for up to a week after it takes place.
“I really just want to thank the community for supporting us and the kids year after year,” Palmer said. “It means so much to the children and adults who participate in the Special Olympics games.”