“When I go home on Tuesday night, I just collapse,” teacher Kymberlee Lewis said, “but it is so much fun.” 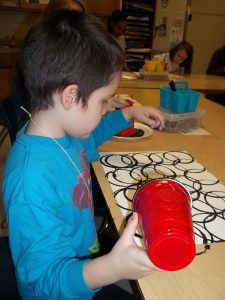 Instead of the structured grade-level program Lewis follows in her daily classes, After-School Art attracts students from kindergarten through fifth grade, plus a couple of middle school girls who are alums. Leila Mendonca, a seventh grader, and Lorraine Baker, a sixth grader, just come back because they love art.

They also pitch in to help a great deal, doling out supplies and clearing up messes.

“Art is definitely messy,” Lewis said. Projects are all over the map, from collages to pottery.

The day that I visited, the youngsters started one project and put finishing touches on another. They also collected the results of glazed clay medallions that Lewis had fired in her pottery kiln.

Print-making was the new project on this day. Leila and Lorraine put puddles of black acrylic paint on paper plates and distributed them among the children seated at the tables.

Each child got a big red plastic Solo cup, and Lewis demonstrated the technique with the help of an overhead projector.

Place the round open top firmly in the black paint; stamp a circle on the white paper; and repeat.

“How many circles?” a boy asks.

“How about three?” comes from another boy.

“I am thinking more like 20 circles, and make them overlap so you can see different shapes,” Lewis tells them as she demonstrates the technique. “Fill up your paper. I don’t want to see any sloppy circles.”

Everyone from kindergarten on up seems to be engrossed in this first step of print-making.

“Probably the hardest part initially was modifying a project so that it worked for kindergarteners through the older kids,” said Lewis, who started the extra-curricular program in 2011. “Now, it is the volume of kids and the size of the room.”

Piles of backpacks line one side of the room, and the two dozen youngsters, their tables and their chairs seem to take up every inch of space not occupied by art in progress or materials.

Third-grader Zach Wells showed me his finished necklace medallion. About two inches in diameter, the medallion has the suggestion of an anchor carved into the clay. The glaze is a pale peach background with pinpoint blue dots. It made me think of the sea and boats and coral.

A fertile source for ideas, Lewis said, has been Pinterest. “I find a project and figure out how to make it my own.”

After-School Art may be one of the most popular extra-curricular activities at MES. In fact, since Lewis started it in 2011, it has grown steadily. This year, she had to turn away some would-be artists. “I just hate that, but the room is only so big!”