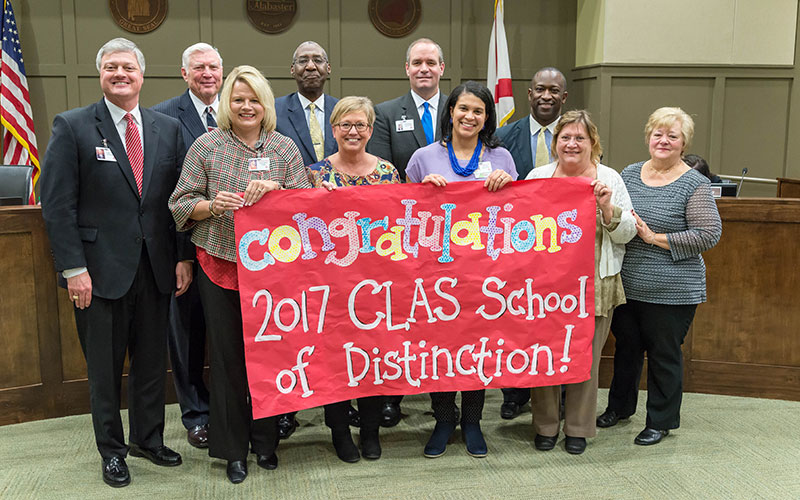 ALABASTER – Meadow View Elementary School is among 24 schools in the state with “outstanding educational programs which serve as models for schools” across Alabama for the 2016-2017 school year, according to a statewide educational leadership organization.

The Council for Leaders in Alabama Schools recently released its list of Schools of Distinction for this school year, and MVES earned the honor thanks to the efforts of its teachers – Specifically first-grade teachers Linda Hogue and Lynda Glass – said MVES Principal Rachea Simms.

The award, which focuses on programs and accomplishments from last school year, focuses on which student-centered programs were in place at the school and how effective those programs were.

Alabaster School Superintendent Dr. Wayne Vickers made a surprise visit to MVES on the afternoon of Jan. 11 to join Simms in congratulating the school’s teachers and staff for earning the recognition.

“Each one of you contributes to the success of our school,” Simms told the MVES employees. “All of you work together to make our school what it is.

“Meadow View is a wonderful place, not because of me, but because of who is here with me,” Simms added. “Our team makes Meadow View a place where kids want to be as opposed to where they have to be.”

As a result of being named one of the state’s 24 CLAS Schools of Distinction, MVES will be recognized during an upcoming awards luncheon, and will be eligible to be recognized as one of the eight CLAS Banner Schools, which will be determined by a committee of representatives from each Alabama Board of Education district.

Vickers said he has been a superintendent in Alabama school systems for the past 11 years, and said this is the first time he has had a school win the CLAS School of Distinction award.

“Meadow View is a school that makes things happen. This is an outstanding school,” Vickers said. “I am so proud of you. Y’all do an outstanding job.”