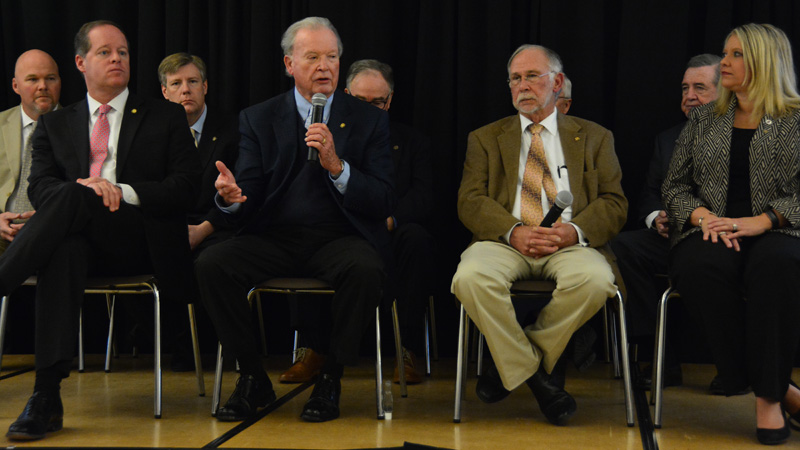 Nine members of the delegation representing the county in the Alabama Legislature previewed the session during an event hosted by the Greater Shelby County, South Shelby County and Montevallo chambers of commerce on Friday, Jan. 12, at Jefferson State Community College’s Shelby-Hoover Campus.

The state senators and representatives seemed to agree that the session would be productive but relatively straightforward because of upcoming elections and sound financial footing.

Rep. April Weaver (Brierfield) mentioned the ongoing flu epidemic and said she is working with the Opioid Task Force to introduce a bill about fentanyl, a deadly substance that is being mixed with heroin.

Sen. Cam Ward (Alabaster) is leading an effort to address the state’s prisons and said an additional $30 million would be allocated to the issue during the budget.

“That is something that continues to plague us, but I’m glad to see that as a state we’re trying to be more proactive now and realize the trouble we’re facing and that we’re willing to take it on,” said Ward, who also praised Shelby County officials for meeting with legislators prior to the session.

Sen. Jim McClendon (Springville) said he will sponsor legislation that would dictate a winner-take-all special election in the event of a vacated seat in the Legislature.

“It’s a really complex issue, and it’s going to be interesting to see who has a problem with this and why they have a problem,” he said.

Sen. Jabo Waggoner (Vestavia Hills) said he will be involved in bills that would make child trafficking a capital offense and create incentives for companies to make broadband available in rural areas.

“You’re going to see a state-wide effort to allow broadband all over Alabama,” Waggoner said.

Rep. Dickie Drake (Leeds) said he spent 42 years in the military and wants to pass a bill that would allow veterans free access to Alabama’s parks year-round.

“This is a small token of appreciation to the veterans who served this country and this state,” Drake said.

Rep. Alan Farley (McCalla) said the Legislature’s challenge is to allocate appropriate funds when 93 percent of the money is earmarked.

“Let’s do the best we can do with the money we’ve got,” Farley said.

Rep. Matt Fridy (Montevallo) said this is his fourth year in Montgomery and the best the state’s finances have looked.

“It looks like we’re going to be able to fund most of what’s being asked for,” Fridy said.

Fridy said he plans to sponsor legislation to end the practice of “ambulance chasing” by increasing fines and making accident reports unavailable to the public.

Rep. Corley Ellis (Columbiana) said he looks forward to working on the House Ways and Means Committee, and to pushing legislation related to appraisals and tax lien sales.

After their remarks, the legislators took questions from those in attendance, including about regulating sales tax proceeds on online transactions, a child custody bill and infrastructure improvements.

Fridy thanked Gov. Kay Ivey for releasing funds for local projects, including the widening of a portion of Interstate 65 in Shelby County.