Bulls give up two unanswered goals late in loss 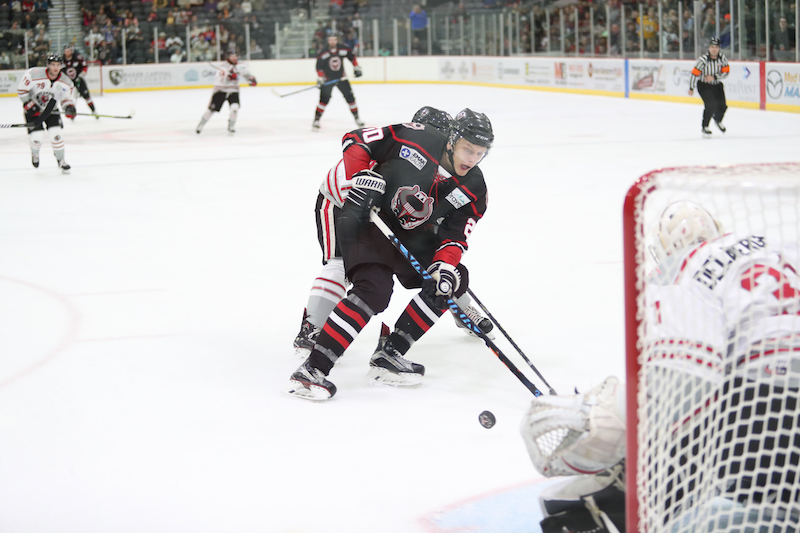 The Birmingham Bulls led for much of the game, but ended up falling to the Huntsville Havoc after giving up two unanswered goals in the final 5:40 of play. (For the Reporter/Dawn Harrison)

PELHAM –  After leading much of the day, the Birmingham Bulls gave up two unanswered goals in the final 5:40 of play to lose 4-3 to the Huntsville Havoc in a matinee game on Monday, Jan. 15.

With kids out of school and many off work for Martin Luther King Jr. Day, the atmosphere was set for the rivals to take to the ice and the excitement didn’t disappoint.

While the Bulls ended up dropping the game late, they did start strong and led throughout as they have for much of the year in the first two periods.

The scoring started in the first period when Brandon Fehd scored the game’s first goal at the 13:17 mark on a power play. Birmingham got the opportunity thanks to a high-sticking penalty from Scott Trask.

With just 5 seconds left on the power play, Fehd was able to put home the goal off assists from Andy Bathgate and Nate Mitton.

Shortly after, the Havoc got a power play of their own, but Mavric Parks was able to make two fantastic saves on Huntsville’s best two shots on goal during the opportunity.

Huntsville got two more great opportunities to end the period as they kept up the pressure, but Parks and the defense made some great plays.

The Havoc got a fast break at the 5:49 mark, but the puck was deflected over the net. Just over 4 minutes later, Parks made another great glove save to keep the Bulls in front 1-0 at the end of the opening period.

Both Birmingham and Huntsville had 10 shots on goal in the first period, which ended up being the most of the game for either team, but it felt like the Bulls controlled the game for the most part. The Havoc had two penalties in the period, compared to one for the Bulls.

Penalties became a major factor in the second period of play as they kept Huntsville in the game.

The Havoc were able to pick up two power-play opportunities after killing a Bulls power play to start the quarter. The first one-man advantage ended with no goal, but on the second chance, Huntsville tied the game at 1-1 after Stephen Hrehoriak slid the puck between Parks’ legs.

The chance came after Nate Mitton was sent to the penalty box for holding. The goal came after Parks made a great save, but just 56 seconds later, Hrehoriak’s goal slid in.

Shortly after, with 8:06 remaining in the period, Craid Simchuk answered for Birmingham. Originally, the Bulls tried to center a pass right in front of the goal, but it slipped back to Simchuk just inside the blue line.

He gathered the puck with a 360-degree turn before firing the shot almost blindly at the goal, which eventually slid under the left hand of Huntsville goalkeeper Mike DeLavergne.

Less than 30 seconds later, Taylor Dickin capped off a 2-on-1 fast break for the Bulls by splitting the puck between DeLavergne’s legs to give Birmingham a 3-1 advantage with 8:37 remaining in the period.

Nate Mitton went back to the penalty box after a slashing penalty with 1:14 remaining in the period, but it probably saved a goal with a lot of congestion in front of the net.

Huntsville, however, was able to capitalizes again as Sy Nutkevitch put home a rebound shot to bring the Havoc within one goal at 3-2.

The Havoc outshot the Bulls 10-7 in the period and were 2-3 on the power play. Birmingham did, however, score two goals in 30 seconds, which was enough to overcome the penalties.

Early in the final period, the Bulls got several great shots on goal thanks to pressure in the offensive zone, but were unable to convert any of the looks into goals.

Leading 3-2 over the next 10 minutes of play, Birmingham had two power-play opportunities come and go with no goals. Had they converted and extended their lead, the Bulls would have extended their lead to 4-2 with little time remaining for the Havoc.

Huntsville took advantage of the impressive penalty kills and scored two unanswered goals in the final 5:40 of play from Shawn Bates and Kyle Sharkey.

Bates’ goal came with 5:40 remaining off a Birmingham turnover. He was able to get a one-on-one opportunity with Parks and slid the puck right between the goalkeeper’s legs for the game-tying goal.

Less than 3 minutes later, Stuart Stefan was able to push the puck up the left wing of the ice on a fast break before giving the puck off to Kyle Sharkey, who had just Parks to beat.

Sharkey did so with ease for the game-tying goal with less than 4 minutes to play. The goal ended up being the difference in the game as Birmingham couldn’t find the back of the net with several shots near the end of the period.

Birmingham was outshot slightly in the game, 28-24, and was just 1-4 on the power play, while Huntsville went 2-5.