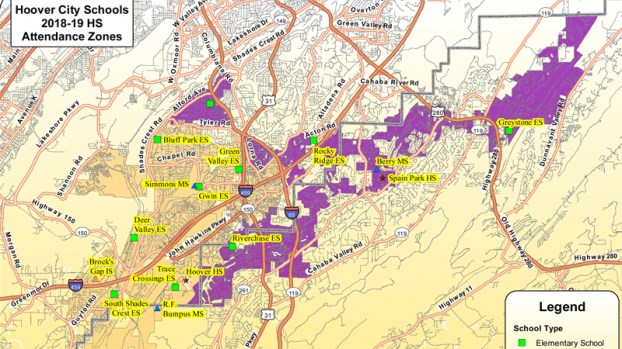 HOOVER – Maps of school zones for Hoover City Schools students for the next school year can now be viewed on the HCS website.

Maps to current and future school zones were posted soon after on the Hoover City Schools website, but were taken down because of a shading error on one of the maps.

The maps can be found at HooverCitySchools.net/Page/1168.

The new districts take effect for the 2018-19 school year that begins in August.

HCS Superintendent Kathy Murphy wrote in a letter to stakeholders that rezoning will help with several lingering capacity issues across Hoover City Schools and help the system work toward achieving unitary status.

“Rezoning has many moving parts beyond the obvious shifting of school boundaries,” Murphy wrote. “Between now and August of 2018, we have much work ahead of us. We will communicate that work to you as we go along so that those impacted by rezoning can plan accordingly.

“We respect Judge Haikala’s court order and will begin work immediately. We appreciate all of the community input and support which helped guide this plan and look forward to continuing our dialogue as rezoning moves forward.”

The rezoning will affect about 16 percent of the student body.

A preliminary rezoning plan was revealed to the public during a community meeting in February 2016. After continued discussions with the Department of Justice and the NAACP Legal Defense and Educational Fund and community input, a finalized plan was approved by the city’s BOE in March 2017.

A rezoning plan was presented to Haikala, she returned questions to the school system in May 2016 and HCS delivered responses in the same month.

The rezoning plan is a key piece of the school system’s effort to satisfy a desegregation court order inherited from the Jefferson County School System and achieve unitary status.

Murphy said rezoning is “Step 1” of the process of achieving unitary status.

By NEAL WAGNER / Managing Editor Several high schools in Shelby County made a national website’s 2018 list of the... read more