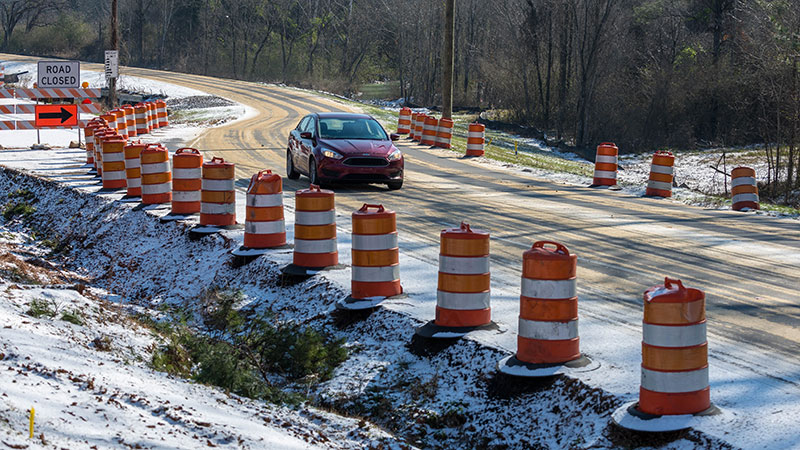 Many roads throughout Shelby County were iced over as the result of a snowstorm that hit Shelby County on the afternoon of Tuesday, Jan. 16 and lasted until the next day. (Reporter photo/Neal Wagner)

Shelby County offices, school systems, local businesses and roads closed in response to a snowstorm that hit the area on Tuesday, Jan. 16. During the snowstorm, up to two inches of snow accumulated on the ground in Shelby County. This is the second time within the past two months that it has snowed.

“It is definitely unusual for us in the south to experience real winter weather,” meteorologist Meredith Wyatt said. “With this being the second time around, we were a lot more prepared.”

“As with any severe weather event, being prepared is of the utmost importance,” Ivey wrote in the proclamation. “Everyone should take the necessary precautions now and stay informed of the latest weather forecasts for their area. The state of emergency will ensure that all available state resources are ready if and when they are needed.”

According to the U.S. National Weather Service of Birmingham, snow began falling at around 3 p.m. and stopped in the early hours of the morning on Wednesday, Jan. 17.

“Even today, we’ve still gotten a few reports of flurries,” Wyatt said during a Jan. 17 interview.

Shortly after the snowfall started, several law enforcement agencies closed roads throughout the county. The Alabaster police department closed all roads in the city until about 9 a.m. on the next day.

No road closures were reported in Pelham, but the city’s major areas were sanded and residents were encouraged to avoid the bridge over Interstate 65 near Pelham Oaks Elementary School. The Helena Police Department also encouraged drivers to avoid parts of Shelby County 17, Alabama 261 and Shelby County 95.

Because temperatures are not expected to rise above freezing throughout the day, Wyatt encouraged residents to avoid traveling on roadways until the ice melts.

“We’re encouraging people to stay inside, not just because of the roads, but also because of the wind and the ice,” Wyatt said. “Back roads and side roads that don’t get a lot of sunlight may still be iced over. If you don’t have to go out, then don’t.”

On the following day, many county offices and businesses delayed opening because of the snow that fell overnight. Officials at the Shelby County Sheriff’s Office initially decided to delay opening for its administrative offices, but later announced that it would be closed all day.

The University of Montevallo also originally announced that it would delay opening until noon, but later closed. Shelby County, Alabaster and Pelham public school systems, along with private schools throughout the county, announced that they would remain closed throughout the day as well.

In the coming weeks, Wyatt said the Birmingham Weather Service has not predicted any more snow. However, it is possible that more snow could come through before the season ends.

“It’s still winter, and we have several weeks until March,” Wyatt said.