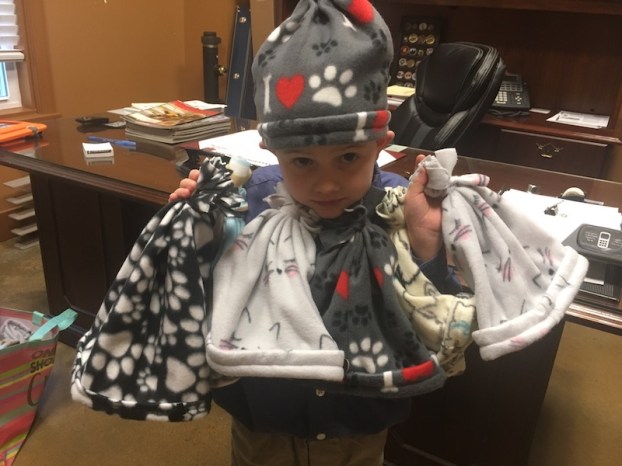 ALABASTER – While many 6-year-olds are into video games or playing outside, one first grader from Alabaster recently decided to use his hobbies to benefit a good cause. In the past two weeks, MVES student Lando Aldridge has spent hours sewing and selling fleece hats for Hats for Cats, his project that benefits Sanctuary Animal Rescue in Alabaster and Buddies Place Cat Rescue in Arlington, Texas.

“I love the kitties, and I don’t want to stop,” Lando said.

Lando’s mother, Francie Ann Vono-Aldridge, said her son first became interested in sewing around Halloween in 2017, when she got sick and started sewing his costume while at home. He later received a sewing machine for Christmas.

“I was sewing stuff by hand,” Vono-Aldridge said. “He came in and became interested, and that’s what got him into sewing.”

At around that time, Lando’s family visited an aunt in Texas who works with Buddies Place and houses several foster cats. Vono-Aldridge said they chose to benefit Sanctuary Animal Rescue, in addition to Buddies Place, to help animals in the nearby area.

“He just thought that was phenomenal. We found out that they didn’t have homes, they needed forever homes, and he wanted to help the kitties,” Vono-Aldridge said. “We wanted to do something local, too.”

Vono-Aldridge said they started out by selling to people they knew at school, work or church, but their efforts quickly expanded.

“Initially, I thought it was just going to be a word-of-mouth thing, but people kept asking us about a Facebook page or a website,” Vono-Aldridge said.

As of Jan. 16, Lando said he has sewn over 100 hats, sold over 20 hats, raised over $200 and has attracted the attention of customers across the country.

“The count keeps going up. Yesterday, we mailed 75 hats to PetSmarts around Arlington, (Texas) for adoption events.” Vono-Aldridge said. “Besides sending the box of hats, we’ve had two orders in Texas, an order in New York and an order in Michigan.”

Through Hats for Cats, Vono-Aldridge said Lando is learning more about finances, math and business.

“It’s teaching him money and percentage skills,” Vono-Aldridge said. “It’s also teaching him that hard work comes into play, no matter what you want to do.”

So far, Lando said he’s enjoyed all of the sewing. He said he imagines that using his sewing machine is a lot like driving a car, because he has to use a pedal and “steer” the fabric. In the future, Lando said he hopes to expand his business to sell more products for cats and humans.

“We’re going to do bags and pillows,” Lando said.

Hats come in 15 different patterns and in adult, child and toddler sizes. They are available for purchase online at the Hats for Cats website, https://francesvono.wixsite.com/hatsforcats/about_us.

HOOVER – Maps of school zones for Hoover City Schools students for the next school year can now be viewed... read more