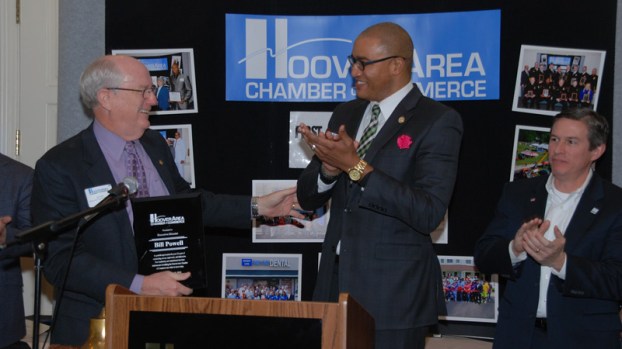 HOOVER – The Hoover Area Chamber of Commerce’s past, present and future were celebrated on Thursday, Jan. 18.

Bill Powell, the chamber’s executive director for the past 23 years, was honored at the same monthly luncheon that the President’s Awards were announced and the 2018 Board of Directors was recognized.

The President’s Awards were first on the agenda.

Then the 2018 Board of Directors was introduced and installed by John Greene, president pro-tem of the Hoover City Council.

“We know for any organization to be successful, it must have good leaders,” Greene said.

Before the board members returned to their seats, Morgan announced several honors for Powell, who is retiring, calling him “the leader, the backbone, the face of our chamber.”

During Powell’s time as director, the chamber has grown from 300 to about 1,200 members, held 240 luncheons (of which Powell has missed only three), held more than 1,000 ribbon cuttings and raised about $450,000 through a golf tournament fundraiser, among other accomplishments, Morgan said.

Morgan presented Powell a plaque recognizing his efforts and announced that an annual scholarship will be named for Powell and his wife.

“This job is the most meaningful and enjoyable job I could ever imagine,” Powell said.

FROM STAFF REPORTS HOOVER – Hoover city officials are gathering public input for the next phase of the Future Hoover... read more