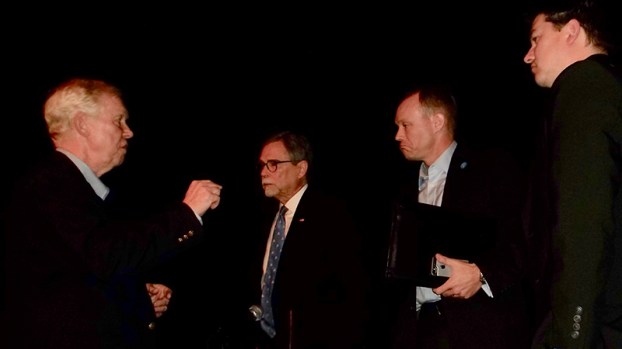 MONTEVALLO – Three lawyers and a preacher, the latest panel to take on the proposed Montevallo Nondiscrimination Ordinance, opposed the NDO’s extension of civil rights protection to LGBTQ individuals.

If enacted, panelists insisted, the NDO would allow the city to discriminate against businesses and churches.

The Thursday night event drew a standing-room only crowd to the Parnell Memorial Library theater.

About half the audience wore stickers declaring: “Equality is not a threat.” There were familiar faces above those stickers, people who had been attending previous NDO discussions over the past six months.  Many were members of MAP—the Montevallo Acceptance Project— the NDO’s authors.

Matt Sharp, an Atlanta lawyer with the Alliance Defending Freedom, said he was trying to protect businesses from a potential $100-a-day fine for refusing to relinquish sincerely held beliefs, and raised the now-familiar specter of men’s invading women’s restrooms.

The NDO, Sharp said, is modeled on laws in other parts of the country to “punish those who hold different beliefs,” including churches, on the issue of privacy.

Sharp said privacy was the most important issue, citing efforts “in Massachusetts and Iowa” to “allow boys into girls locker rooms.”

According to the Southern Poverty Law Center web site, Sharp’s organization “has supported the re-criminalization of homosexuality.”

Adam Macleod, a professor at Jones School of Law in Montgomery, called the NDO a means “to empower government officials to discriminate against people of conscience.”

It would, Macleod said, “perpetrate discrimination against people who hold the view that marriage is a man-woman union.”

Macleod said LGBTQ individuals face “no systemic exclusion such as occurred during Jim Crow” toward African-Americans and thus have no right to be a protected class.

Next up was A. Eric Johnston of the Southeastern Law Institute. Johnston’s organization fights abortion rights and same-sex marriage.

As he opened his remarks, Johnston took note of the many “Equality is not a threat” stickers worn by his audience. He drew derisive laughter when he said that “Equality IS a threat under some circumstances.”

As did the previous speakers, Johnston painted the NDO as a vehicle by which LGBTQ protections can be forced on an unwilling community. The NDO, he said, “will alienate people because it is a threat to their individual rights.”

Basically, he called on his audience “to respect the rights of others.” The NDO is an effort “to pre-empt the rights of . . . those that believe homosexuality is a sin.”

The Rev. Harry Reeder, senior pastor at Briarwood Presbyterian Church, continued the theme that the NDO threatens freedom of religion, but he added a twist.

Rights come from God, not government, Reeder said, “and we should protect everyone because they are made in the image of God.”

The NDO, by adding LGBTQ individuals to the classes already protected by federal and state law, Reeder said, changes that by giving “civil rights, not to people made in the image of God, but to the choices that people make.”

Afterwards, Greg Reece of Montevallo said, on behalf of MAP: “We are a group of people who live and celebrate and worship and mourn together.” Gesturing toward the panelists who were packing up their papers, Reece added, “I don’t see how they can profess to know us better than we know ourselves.”