COLUMBIANA – A 25-year-old Alabaster man is set to appear in Shelby County Circuit Court later this month for a plea hearing on a methamphetamine-trafficking charge brought against him by the state Bureau of Investigation. 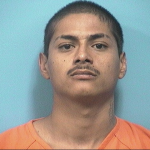 Oscar Carranza was indicted by a Shelby County grand jury in October 2017 on one count of trafficking meth, and he subsequently pleaded not guilty to the crime.

Carranza is now set to appear in Circuit Court on Jan. 30 at 8:30 a.m. for a plea hearing in front of Judge William Bostick.

Carranza was arrested on June 15, 2017, along with 53-year-old Alabaster resident Eloy Carranza-Alvarez by the Alabama Law Enforcement Agency’s State Bureau of Investigation and charged with the drug crimes.

Their charges are tied to a June 15 incident in the 300 block of South Colonial Promenade Drive in Alabaster, during which the two suspects allegedly were in possession of 354 grams of methamphetamine, according to their charging documents.

Carranza-Alvarez is set to appear in court for a status hearing on March 12, according to court documents.

Carranza and Carranza-Alvarez have been held in the Shelby County Jail on bonds totaling $100,000 since they were arrested.