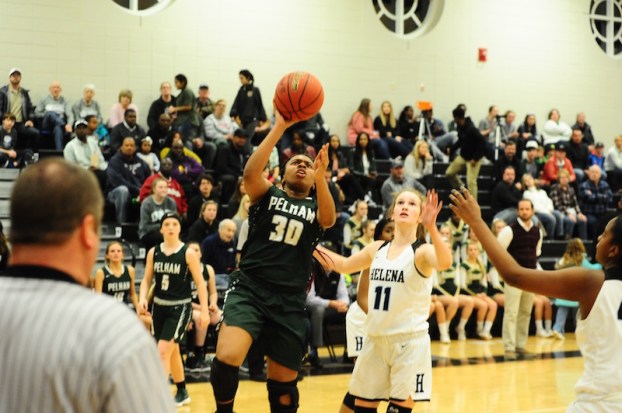 Jamila Wilson ended the game with a team-high 12 points in a big area win against the Helena Huskies on Friday, Jan. 19. (Reporter photo/Alec Etheredge)

HELENA – The Pelham Panthers’ girls basketball team had five different players score at least six points on Friday, Jan. 19, in a balanced attack that led to one of its best performances in the last two years.

Led by Jamila Wilson and Emma McKinney, the strong effort by the Panthers gave them their first area win of the season as they scored 43 points to take down the Helena Huskies by a final of 43-30.

The game started out slow in the first quarter with the two teams struggling for points, but playing strong on the defensive end of the floor.

Through the first 7:45 of action, the two teams had played to a 6-6 tie, but Jordan Jones hit a jumper with 15 seconds remaining in the period to give the Huskies the edge at 8-6 at the end of the quarter.

Jones ended the first with four of the eight points from Helena, while Pelham got points from four different players

Trailing at the end of one, with the offense struggling to score points—as has been the case on many occasions this season for the Panthers—Pelham clicked into a new gear in the second quarter, one the team possibly hasn’t found all season.

The impressive quarter of play started with a quick 5-0 run in the first 1:10 of the quarter as Pelham stormed in front to take an 11-8 lead.

Great play on both ends of the court led to charges and steals, which eventually turned into points on the offensive end. The Panthers eventually gathered a seven-point lead, but took a 22-16 lead into the halftime break.

Lauren Watts’ hustle up and down the floor was a big reason for the impressive quarter by the Panthers. Her efforts also led to five points for herself in the period, while four different Pelham players scored at least three in the period.

Coming out of the half, the game got back to its roots as a gutsy defensive battle.

Neither team could sustain any sort of momentum or run, which led to a very evenly matched quarter between the two. Traded baskets led to each team posting eight points in the quarter.

The Huskies eventually got within four points after Jones put in a strong and-1 and knocked down the free throw to make the score 28-24, but Jamila Wilson responded on Pelham’s next possession with a jumper from the free throw line to put the Panthers back up by six at the end of the third quarter.

The built up lead helped Pelham play a little bit more relaxed and less panicked in the final quarter as Helena never got any closer to the lead than five points in the fourth.

The Panthers knocked down seven of 10 free throws in the period to seal the win by the final score of 43-30.

Wilson led Pelham with 12 points in the game, while Emma McKinney added 10 in the win.

The Panthers are now 6-15 overall, but more importantly 1-2 in area play, which made Class 6A, Area 8 more of a toss-up.

Helena still has the upper hand of the two with a 1-1 area record, but Chelsea sitting at 1-0 is in the best shape of the three right now.

The Huskies were led by Jones with a game-high 17 in the loss as the rest of the team had just 13 points.

FROM STAFF REPORTS COLUMBIANA–Randy Fuller, who has served three consecutive terms as Superintendent of Education for Shelby County Schools, has... read more