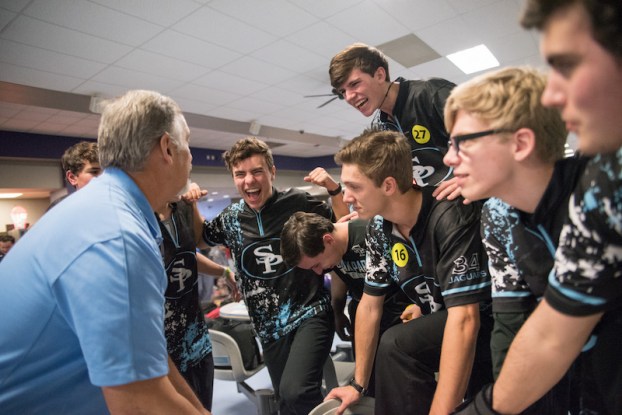 Spain Park’s boys bowling team will look to complete the three-peat at the state bowling tournament on Friday, Jan. 26, after qualifying out of the South Regional. (File)

FOLEY – Two of the best schools when it comes to high school bowling will have representation at the 2018 AHSAA Bowling State Championship held at Oak Mountain Lanes in Pelham Thursday, Jan. 25 through Friday, Jan. 26.

Spain Park’s boys and Thompson’s boys and girls will all be competing in the state championship after picking up first-round wins at the South Regional in Foley on Friday, Jan. 19.

SPHS beat Vestavia 1,034-899 last year and Stanhope-Elmore 1,836-1,576 in 2016 to claim the first two state championships. Now they sit four wins away from picking up a third consecutive blue map in the sport.

To get to this point, the Jags had to take down Beauregard in the first round of the South Regional, which is something they did with ease.

Thanks to gathering the No. 1 seed in the tournament after a dominating first day of the event, Spain Park was able to seal a third straight trip to state by taking down 16-seed Beauregard 1,474-1,069 on day two in the first round of the elimination portion.

Thompson boys fell 1,613-1,475 in the first round of 2016 state tournament and lost to Vestavia 1,005-896 in the second round last year. The Rebels went on to lose to Spain Park in the state championship round.

Now, each Thompson team will look to take that next step and win a state championship in 2018, and they are both off to good starts in the South Regional.

The boys, led by Landon Masters and Caleb Farmer with a combined total score of 1,252 on day one, were able to pick up the No. 3 seed heading into the elimination portion of regionals.

In the first-round of elimination play, Thompson was able to pick up a dominating win by 519 pins as they took down Alma Bryant 1,564-1,045 to seal a spot in the state championship.

Thompson had two bowlers take the top two spots in overall individual performances in the first round of elimination play as Caleb Farmer finished first with a total of 246 and Landon Masters finished third with a total of 237. Spain Park’s Devin Dowdle tied with Masters, totaling 237.

While the boys were impressive, Thompson’s girls decided to one-up their counterpart. The Warriors used a total of 2,399 in the seeding round of regionals, which was good enough for the No. 1 seed heading into the elimination round.

During the preliminary round, Thompson was led by Gillian Baker with games of 217 and 214, while Katie Keener ended up with a total of 483 through the series to finish fifth for the day.

Eyeing elimination in the first round of day two, Thompson won four consecutive games to pick up a 1,182-850 win over Alma Bryant to advance in regionals as well as claim a spot in the state championship.

Gillian Baker’s total of 213 was the best total of the first elimination round in regionals.