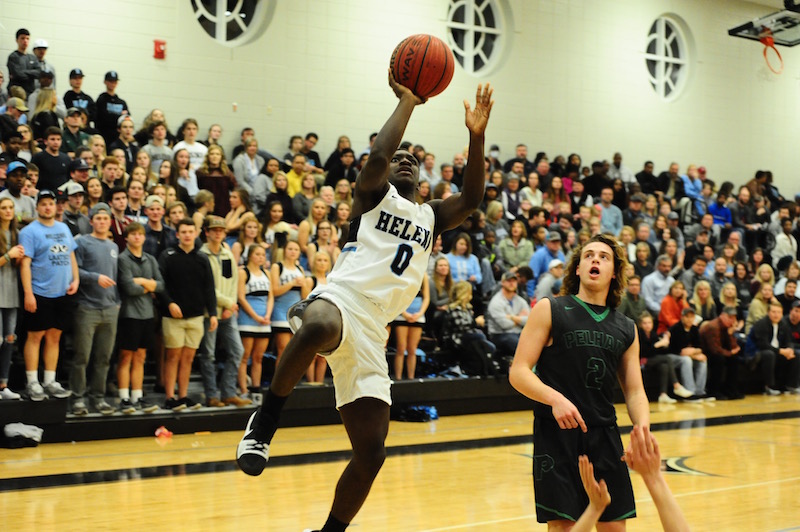 Dionte Tolbert got in early foul trouble and didn’t have a huge impact offensively, but played great defense throughout the night on Justin Allison. (Reporter photo/Alec Etheredge)

HELENA – Thanks to four clutch free throws in the final 44.6 seconds of the game, the Helena Huskies were able to hang on for a 35-32 win over area foe Pelham on Friday, Jan. 19.

It marked the Huskies’ second win over the Panthers in nine days after picking up a 66-43 win back on Jan. 10, but the second time around was much more competitive.

Trailing 32-31 after Pelham’s Justin Allison hit a 3-pointer to put the Panthers in front, Helena was facing its third loss of the season with right around a minute to play in the game.

That’s when Justin Stuckey, who was the difference in the game, was able to start creating contact.

The senior leader was able to draw a foul with 44.6 seconds remaining and calmly stepped to the line to not just tie the game at 32-32, but give Helena the lead for good at 33-32 after knocking down the second free throw.

After Pelham’s Blake Floyd, who had possibly his best game of the season, missed a wide open 3-pointer to put the Panthers in front, Stuckey was right there to chase down the rebound.

He was fouled again, and for the third and fourth time in a row, Stuckey stepped up to the line to knock down clutch free throws to extend the Huskies’ lead.

The Panthers got one last chance with 3 seconds remaining, but an errant pass led to a turnover right as the final second ticked off the clock to preserve the win for Helena.

A big reason why the game was more competitive this time around was the level of defense by which each team played with.

That defensive battle started in the opening minutes as the two scored just five combined points in the first 4 minutes of the game.

Helena scored first on a strong post move from Deven Tucker, but Floyd then hit a 3-pointer and Pelham played from in front the remainder of the quarter eventually grabbing an 11-7 lead.

The Huskies had cut the lead to one just before the end of the quarter, but with 0.5 seconds left in the period, Pelham inbounded the ball to Justin Allison in the corner, who calmly sank a 3-pointer at the buzzer.

Despite scoring just five points in the frame, the Panthers continued playing from in front in the second quarter. A big reason for that was their strong level of play defensively.

While Helena’s ball movement was smooth and very well executed, Pelham’s defense was closing the gap quickly and not allowing any easy opportunities.

Still, the lack of points by Pelham allowed for Helena to climb closer to the lead at the half. After Nate Andrews hit a 3-pointer late for Helena, the Huskies had gotten within one at 15-16 heading into the break.

Helena used the momentum it capped off the first half with and carried it over into the third quarter.

It started with two consecutive offensive rebounds in the Huskies’ first two possessions of the quarter. One came from Dionte Tolbert as he scored his only two points of the game, while Stuckey added the other.

That seemed to set the pace for the quarter as Helena went on to outscore Pelham 14-8 in the period to take a 29-24 lead into the fourth.

The Panthers weren’t ready to go away quietly and came out with a purpose in the first two possessions of the final period.

It started with Chris Brown on the first possession. Brown, who is the second leading scorer on the team, had just two in the game up to that point, but made a big jumper.

Allison added a 3-pointer on Pelham’s next possession to quickly tie the game after a 5-0 run by the Panthers.

Daunte Cave spun the momentum back in Helena’s favor shortly after with a huge layup through contact to give the Huskies a 31-29 lead. He had a chance at a three-point play, but missed the free throw.

Allison took advantage for Pelham by hitting a step-back 3-pointer to give the Panthers the advantage with a minute to play.

That’s when Stuckey took over to cap off his 14-point night with four unanswered free throws to seal the win for Helena.

Aside from Stuckey’s 14, Tucker had a strong game in the post with nine points, while Cave added seven.

Allison ended the night with a game-high 15 points, while Floyd threw in an additional 11 points.

Helena moved to 22-2 overall this season and a step closer to the regular season area championship and a berth in the regionals of playoffs by moving to 2-0 in area play.

Pelham gained some confidence, but sits at 6-13 overall and 0-3 in area play. 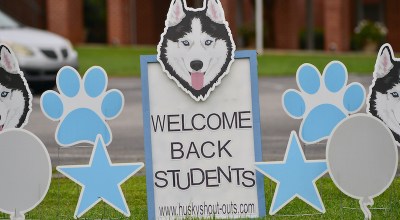