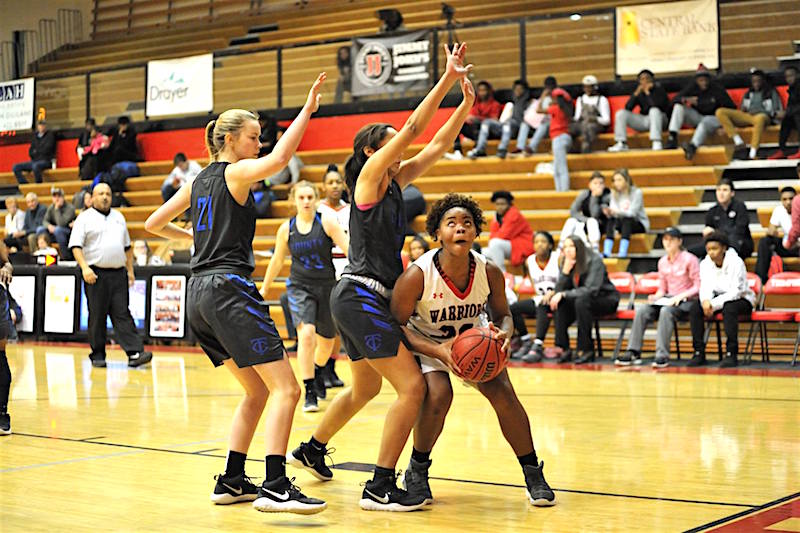 Zoriah Miller had a game-high 19 points to lead Thompson to its second consecutive area after the Warriors took down Tuscaloosa County 67-61. (For the Reporter/Larry Dancy)

ALABASTER – With an area win over Vestavia on Jan. 12, Thompson’s girls basketball team made it known that they were going to compete for one of the top two spots in Class 7A, Area 5.

That win moved them to 1-1 in area play after falling to Hoover a few days earlier, but on Thursday, Jan. 18, the Warriors had a chance to move above .500 in area play and cement themselves as the favorite for the No. 2 spot in the area with a home matchup against Tuscaloosa County.

A strong third quarter and three players in double figures helped lead Thompson to a 67-61 win over the visiting Wildcats to move to 2-1 in area play and 9-12 overall.

Now winners of three straight games, Thompson is clicking at the right time. But early in the contest, the Warriors found themselves in a battle.

The first quarter couldn’t have gone any better as six different players scored in the period for Thompson to give them 15 points, while the defense limited Tuscaloosa County to four made baskets and eight points in the quarter.

Things took a turn in the second period as the Wildcats scored 20 points behind six different players, while the Warriors drained just four baskets in the quarter.

Thompson managed just 11 points in the second, which led to Tuscaloosa County grabbing a 28-26 lead at the half.

The Warriors made the necessary halftime adjustments and poured on the points in the third quarter to retake control of the game.

Zoriah Miller and Brooklyn Oden each made three baskets in the quarter to help with the effort. Miller had eight of her game-high 19 in the period, while Oden added eight of her own with two 3-pointers.

Their strong play led to 21 points in the quarter, while Thompson’s defense picked back up and limited the Wildcats to four made baskets for the second quarter in the game.

Heading to the final period, the Warriors looked to have things in hand with a 47-37 lead.

In the final period of play, Thompson was forced to hang on for the win by knocking down free throws.

The Wildcats scored 24 in the period thanks to nine points from Tamia Knight and six from Resha Kiny.

Knight had 16 points to lead Tuscaloosa County, while Kiny added 15 for the Wildcats.