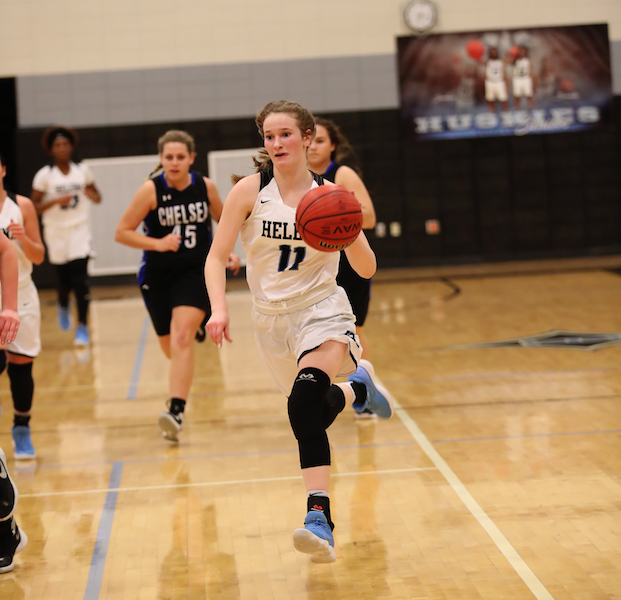 Helena’s Chloe Van Kovering (11) sank three 3-pointers in the first half to help the Huskies take down Chelsea 59-35 in an area game on Jan. 22. (For the Reporter/Cari Dean)

HELENA–After a disappointing loss to rival Pelham on Friday, Jan. 19, the Helena Huskies girls basketball team had no time to dwell on the loss as another big area game was just three days away.

After scoring just 30 points in the loss to Pelham, the Huskies rebounded in a huge way to take down Chelsea 59-35 on Monday, Jan. 22, to improve to 2-1 in area play.

Lights out shooting in the first half and strong execution on the offensive end of the floor led to a barrage of points for Helena and a huge lead they never relinquished.

In the first half alone, Helena drained seven 3-pointers and raced out to a 42-15 halftime lead. The Huskies’ 42 first-half points were 12 points more than the total points scored in the loss to Pelham.

Nine of Chloe Van Kovering’s 10 points came from beyond the arc in the first half, and seniors Brandis Lang and Jordan Jones also finished in double-figures for the Huskies. Jones finished with a game-high 13 points while Lang added 10.

Helena head coach Alan Skinner said the fast start was exactly what the Huskies needed to get back on track.

“We ran offense and rebounded really well,” Skinner said. “We came out and played more to our abilities. We were attacking the rim, spreading the floor and our guards were out there playing hard. We were very crisp and very high-energy in that first half, especially offensively.”

As much as the offense stood out for Helena, the defense was also impressive as the Huskies finished with 12 steals and held Chelsea scoreless in the second quarter.

“We did go (full-court) pressure right at the beginning of the second half just because I wanted to make sure in our head that we could not let our energy sink because we started the game with such high energy,” Skinner said.

The Hornets were led by Hope Richard, who finished with nine points in the loss.

Helena will try and take the regular season area crown on Friday, Jan. 26, as the Huskies and Hornets will meet again at Chelsea.

By GRAHAM BROOKS / Staff Writer HELENA–In a game that featured more than a dozen lead changes in the first... read more