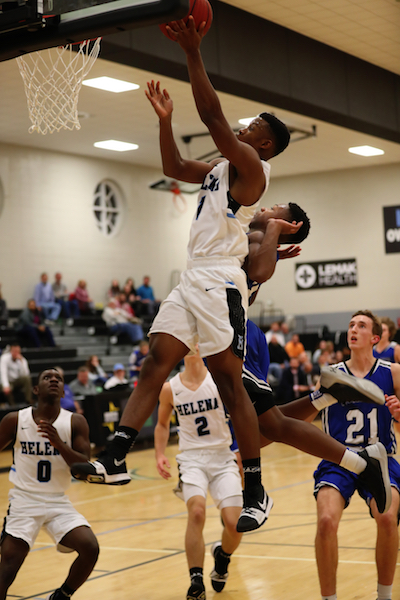 Helena senior Justin Stuckey (1) finished as the leading scorer against Chelsea with 21 points on Jan. 22. The seniors combined for 46 of Helena’s 56 points in the game. (For the Reporter/Cari Dean)

HELENA–In a game that featured more than a dozen lead changes in the first half and more than 20 fouls whistled in the second half, the Helena Huskies boys basketball team found a way to grind out a tough 56-43 area win over the visiting Chelsea Hornets to stay unbeaten in area play.

The Huskies (23-2, 3-0) were led by senior guard Justin Stuckey who finished with 21 points with 10 of those coming from the foul line.

The Hornets (11-11, 1-1) were looking to pull off the upset on the road and for the first three quarters, Chelsea was primed to do so thanks in large part to Tyler Coleman’s 17 points.

Both teams came out trading baskets in the first quarter, but two 3-pointers and an and-1 by Coleman accounted for nine of Chelsea’s 11 first-quarter points as they took a two-point lead after the first eight minutes.

More of the same occurred in the second quarter, until Stuckey gave the Huskies a spark with under two minutes to go until halftime.

Trailing by two, Stuckey stepped up by burying a 3-pointer while being fouled. After making the free throw, the Huskies regained the lead 22-20 and closed out the half with a 24-22 lead.

In the second half, things got a little chippy late and frustrations mounted as numerous fouls were called on both sides.

The third quarter alone featured 14 fouls called–seven on each team, as more than 20 fouls were called in the second half.

Both teams combined to shoot 48 free throws but the fourth quarter belonged to Helena as the Huskies outscored the Hornets 21-11 after leading by just three at the end of the third quarter.

Helena made 10 free throws in the fourth quarter and kept Chelsea from scoring quickly to pull away for the double-digit win.

Incredibly, the Helena seniors accounted for 46 of the Huskies’ 56 total points as Dionte Tolbert had four points, Ben Rose finished with nine points and Deven Tucker scored 12 points in addition to Stuckey’s 21.

Helena head coach Chris Laatsch talked about how his seniors played a huge role in getting the big area win.

“Those four kids are unbelievable and they scored 46 of our 56 tonight,” Laatsch said. “They’ve been the heart and soul of our team and just continue to find a way. They’re our four leading scorers and our leading rebounders and they just do everything. They defend well, lead well on the floor and off the floor so tonight’s just an example of how they’re the heart and soul of our team.”

Helena will have a chance to wrap up the regular season area championship this week by one of two ways. The Huskies will win the area if Pelham upsets Chelsea on Tuesday, Jan. 23, or if Helena beats Chelsea again on Friday, Jan. 26.