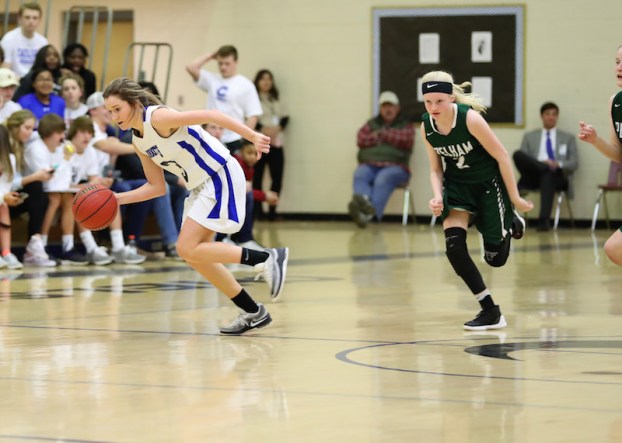 Chelsea's girls were able to pick up a big area win over Pelham on Tuesday, Jan. 23, as they staved off a comeback. (For the Reporter/Cari Dean)

Hornets win thriller with against Panthers

CHELSEA – The Chelsea Hornets girls’ basketball team was able to stave off a late fourth-quarter run to defeat the Pelham Panthers by a final score of 60-58 on Tuesday, Jan. 23.

Pelham was eventually able to grab a 49-45 advantage with just over 4:30 to play in the game as it looked like all of the game’s momentum had shifted in the Panthers’ favor.

They added one more 3-pointer shortly after to take a 52-47 lead, but that’s when the Hornets mounted a comeback of their own. Chelsea went on a 7-2 run over the next couple of minutes of play to tie the game.

After Pelham hit a jumper to go back on top, the Hornets instilled their presence on the glass to pull out the win. Trailing 54-52, Chelsea grabbed two offensive rebounds in two possessions, which led to easy put backs and the 56-54 lead.

Pelham kept the deficit within four the rest of the way, but never got within two over the final two minutes of action thanks to strong free throw shooting form the Hornets as they held on for an exciting 60-58 win.

While it ended in Chelsea’s favor, the Panthers picked up where they left off on Friday night against Helena in the first quarter against Chelsea.

Jamila Wilson took advantage of her growing confidence and posted nine of Pelham’s 14 points in the quarter to get off to an impressive start to follow up her 12-point performance against the Huskies.

Wilson ended up outscoring the Chelsea by herself in the opening period as the Panthers’ defense limited the Hornets to just eight points in the quarter leading to a 14-8 Pelham lead.

Chelsea made the adjustments it needed to in the second quarter, however, and locked down not just on Wilson but the entire Pelham offense.

Wilson posted just one point in the quarter, while the Panthers were only able to grab three points in the frame, all from the free throw line.

The Hornets took advantage of their strong defense and went on a 16-5 run in the second period to storm in front by five at the break.

Presley Rains hit two 3-pointers, while Hope Richard hit an old fashion 3-pointer with an and-1 to end the quarter for Chelsea. The impressive play put Chelsea up 24-19 at the half.

The Panthers scored first to start third quarter, but the Hornets went on their strongest run of the game for the majority of the quarter eventually grabbing a 15-point 38-23 lead, before Pelham started storming back only to come up two points short of sending the game to overtime.

Chelsea holds on for area win against Pelham

By ALEC ETHEREDGE | Sports Editor CHELSEA – Chelsea led by as many as 21 points at one point in the... read more