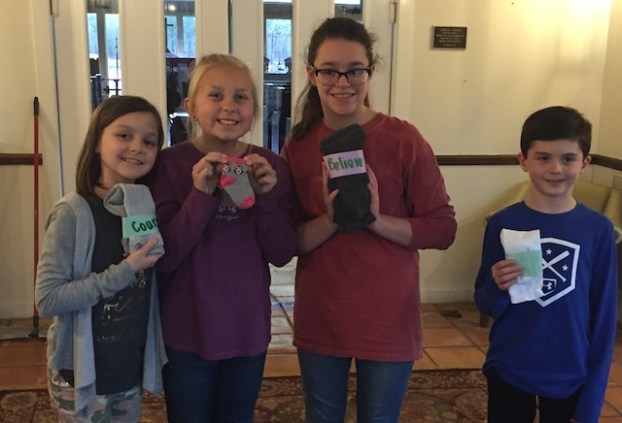 MLES students deliver new pairs of socks that were collected during the "Socktober" donation drive. (Contributed)

Robbins said this is the second year for her classes to do the project, which was originally inspired by a similar donation drive held by YouTube personality Kid President.

“We felt like that was something that wasn’t really focused on, but was a necessity,” Robbins said.

While she introduced the idea, Robbins said her students deserve full credit for going out, advertising the drive and collecting donations from family, friends and neighbors.

“They created a flyer and planned out where they would put it. They really took ownership of the project,” Robbins said.

Additionally, Robbins said students decided to write heartfelt and inspirational messages with each pair of socks.

“Most of them came up with their own inspirational, positive messages, which helped them show compassion and serve others,” Robbins said.

Robbins said the socks collected by fourth and fifth graders at FOES will be donated to elementary schools within the Shelby County Schools system, and socks from MLES fifth graders will benefit King’s Home in Chelsea.

“Every pair will go to residents at King’s Home,” Lackey said. “We average about 100 residents, so that’s about six new pairs of socks each.”

“It’s a bigger need than you would think. Socks are one of those things that’s often overlooked. In winter, that’s when the typical person wants to have their feet warm all the time,” Lackey said.

Because collecting over 600 pairs of socks was a big undertaking for fifth graders, Lackey said she and King’s Home residents are especially thankful and impressed.

“It was so amazing,” Lackey said. “It wasn’t just the teachers doing it, it was the kids who were passionate about wanting to help. It really was a community effort.”