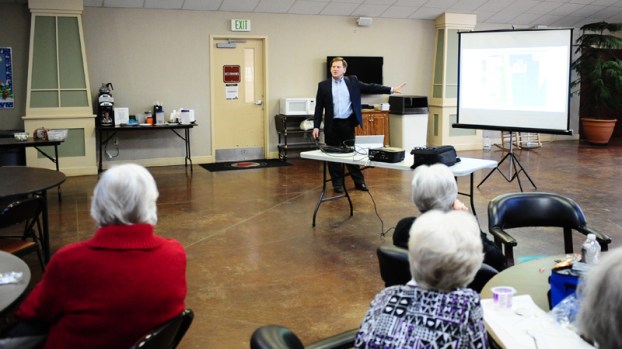 NORTH SHELBY – As the first Senior Leadership Academy approaches its conclusion, plans are already under way to extend the program across Shelby County.

A pilot program is being held at the Heardmont Senior Center, with one day each week for 10 weeks devoted to teaching the seniors who attend about different aspects of public service in the county.

A graduation ceremony will be held on Tuesday, Jan. 30

Lt. Cody Sumners with the SCSO said his parents’ neighbor in Chelsea, Skip Brown, is retired from the Delray Beach Police Department and told Sumners about a similar program undertaken there.

“I got the idea from him and proposed it to the sheriff, and the sheriff was all for it,” Sumners said about Sheriff John Samaniego’s support of community-focused policing.

Graduates must have attended seven of the 10 classes.

Sumners said the idea is for the senior leaders to take the knowledge they acquire from the Academy back to their communities.

On Tuesday, Jan. 23, Shelby County 911 Executive Director Alan Campbell talked about the origins of 911 in the United States and Shelby County’s commitment to the service.

“We have all the resources we need to do the job well, and that’s not common throughout the state,” Campbell said.

Campbell told how 911 evolved from town criers to the advent of the telephone, with the first 911 in the country actually placed in Haleyville on Feb. 16, 1968.

Shelby County 911 was established in 1988 and now is comprised of 42 full-time and 10 part-time employees.

Campbell also discussed whether 911 can located the user of a mobile phone (not most of the time), how they received two text messages about emergencies last year and how the staff determines which emergency responders to dispatch.

After Campbell, Cody Lewis with M4A talked to attendees about technology issues, including how to power off and restart computers, email accounts, WiFi networks, Google searches, passwords and online banking, among other topics.

Lewis encouraged attendees to follow guidelines about creating passwords such as alternating capital and lowercase letter, using special characters and keeping the passwords in a secure location.

“Your identity is very vulnerable online,” Lewis said. “I’m not trying to scare anybody, but I do want you to be secure.”

Sumners said the Senior Leadership Academy program could be extended to 12 weeks for future sessions and could be instituted at other senior centers in the county, including Chelsea, Pea Ridge, Dunnavant and Vandiver.