Calera jumps in, Helena and Vincent move up in latest poll 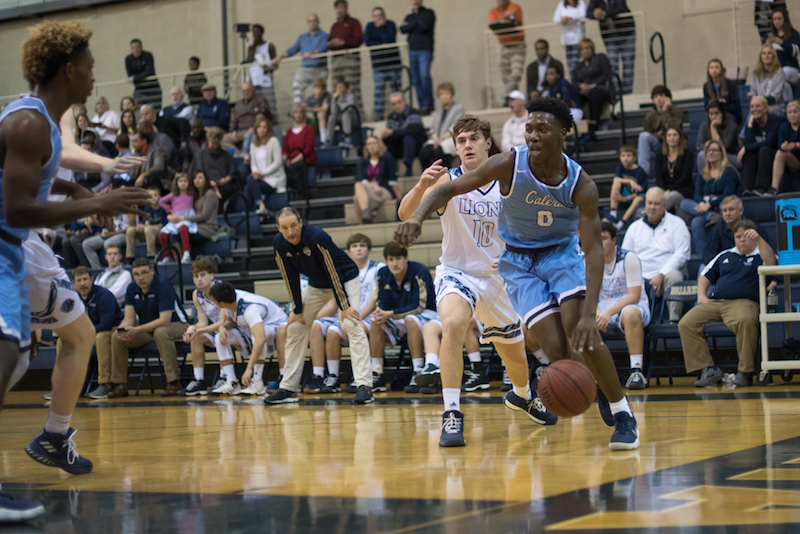 The Calera boys basketball team has jumped into the 5A top 10 for the first time this season after winning 18 of their last 19 games. (Reporter photo/Keith McCoy)

It’s been since early in the season that the county has had three teams ranked inside the Alabama Sports Writer Poll’s top 10, but thanks to the Calera Eagles incredible run, the county now has three ranked teams again after they propelled into the latest 5A standings.

While Calera (19-4, 6-0) jumping into the 5A classification’s top 10 at No. 7 was a big enough storyline, Helena and Vincent both jumped up to No. 2 in their respective classification to create some buzz as well.

It’s been a busy week for Calera, who is getting all kinds of attention from a recruiting aspect in the sport of football, but the basketball team also shined in front of Clemson head coach Dabo Swinney on Monday, Jan. 22, as the Eagles took down Briarwood 67-48.

That win was part of a current win streak that features victories in 18 of their last 19 games as the Eagles have already won the regular season area championship with a perfect 6-0 record and will host the area tournament the week of Feb. 5.

Other wins in the last week to propel them into the top 10, include a 65-53 win over Chilton County and a 92-40 win over Marbury. Calera has plenty of games left in the final week and a half of the regular season, including county games against Briarwood, Chelsea, Montevallo and Shelby County.

The only team to beat Calera in that 19-game stretch was the Helena Huskies as they took down the Eagles 63-50 back on Thursday, Jan. 4, in the quarterfinals of the Jefferson-Shelby Hoops Classic.

Sitting at 24-2 overall this season and 5-0 in area play ahead of a game with the Chelsea Hornets for the regular season area championship and a spot in Regionals on Friday, Jan. 26, the Huskies have won six consecutive games since losing in the title game of the Jefferson-Shelby Classic.

With their two losses being by a combined seven points, this team not only has one of the best records in the state, but is extremely close to being undefeated. The loss in the Jefferson-Shelby tourney came 44-39 to Shades Valley, while the Huskies’ other loss was 41-39 to McAdory—a team they beat just a week earlier.

While the Huskies were No. 2 in the 6A classification, the Vincent Yellow Jackets came in at that exact same spot in Class 2A.

Since falling 33-30 to Montevallo in the quarterfinals of the Jefferson-Shelby Classic, the Yellow Jackets have gotten back to their winning ways reeling off five consecutive victories.

Vincent sits at 17-5 overall this season and remains 2-0 in area play with two area games separating them from a regular season area championship and a guaranteed spot in the regional round of the playoffs.

The Yellow Jackets have beaten Shelby County, 45-20, and Winterboro, 52-45, since the last rankings were released.