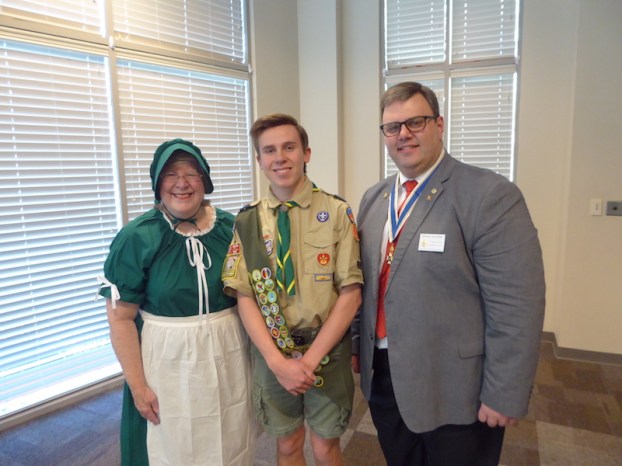 2018 is the year to honor Alabama’s people. At the completion of the cemetery’s renovation, a celebration will be held for the pubic to honor descendants of Mary and David Lindsay, Revolutionary War Patriot and Shelby County Pioneer.

David Lindsay, born in 1745 in Pennsylvania, served in the Pennsylvania Militia during the Revolutionary War. He moved with wife Mary Casey Lindsay and their 12 children to the Alabama-Mississippi Territory in 1816, where daughter Rebecca married David Fulton.

The family settled in Shelby County, where many of their descendants still live today. The cemetery was registered on the Alabama Historical Cemetery Registry on June 19, 2017.  Fifth great-grandson Scott Martin prepared the application.

The David Lindsay Chapter was charted in 1927 in Montevallo, Alabama, and several of Lindsay’s descendants are currently chapter members: Audra Laverton White, Jenny Bole Bartlett, Sarah Brasher Kendrick and Marsha Garrett McCaig. On Alabama Day 1953, the chapter dedicated the cemetery with the existing markers and fence. In 2007 after years of extensive research, David Lindsay was certified as a DAR Revolutionary Patriot.

Jones, a senior at Helena High School, chose to replace the existing fence, make a new historical kiosk, and landscape the cemetery for his Eagle project. Son of Ken and Peri Jones of Helena, Jones will be attending Auburn University majoring in engineering. He is raising funds for the fence though his Go Fund Me page: Gofundme.com/caleb.jones-eagle-project.

“I wanted to do a project that was meaningful to a lot of people,” said Jones. “David Lindsay is a patriot who fought for the initial freedoms we enjoy today. His descendants can know his legacy will be preserved and not be forgotten. Finally, my father who passes the site everyday going to work, can hopefully be proud to call his son an Eagle Scout.”