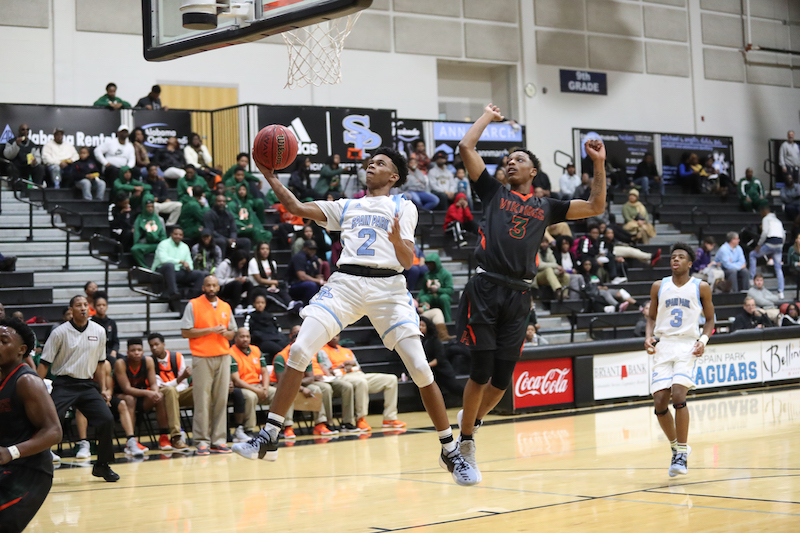 Parker Boswell floats in the air before laying the ball in. He had 10 points in Spain Park's hard-fought effort against Huffman. (For the Reporter/Dawn Harrison)

The Jaguars (5-14 overall, 0-4 in area play) were down 7-2 early, fought back to trail by only two at halftime, fell behind by nine points in the fourth period but came back yet again, finding themselves within striking distance as the game wound down.

Spain Park’s seniors—Matthew Pickard, Dayquan Williams, Jaden Jenkins, Anthony Minopoli and William Blalock—were recognized before the game and then all started the game on the floor.

Inspired to play well in their final home game for Spain Park, the group went up 2-0 on an offensive rebound and putback by Williams.

But Huffman then went on a 7-0 run and took a 16-6 lead on a three-pointer by Jeremiah Williams, who led his team with 21 points in the game.

The Jags finished the first period with a flourish as Blalock stole the ball then finished on the other end before draining a three-pointer on his team’s next possession.

The score was still 19-11 in favor of Huffman, but the Jaguars outscored their visitors in the second half on the strength of seven points each from Parker Boswell and Dayquan Williams, who finished the game with a game-high 22 points.

Spain Park trailed at halftime, 28-26, after two free throws by Boswell with less than a minute remaining on the clock.

The Jags tied the game in the third period on a Williams score, but Huffman responded with a 7-0 run.

With about 2 minutes left to play in the game, Trey Johnson’s floater rolled around the rim and through to pull the Jaguars to within 51-46 of Huffman, but the hosts could get no closer.