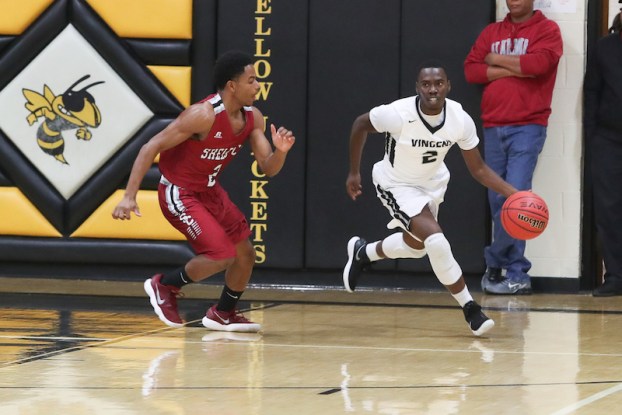 Zavien Kelley, above with the ball, scored a game-high 17 points in Vincent's win over Winterboro on Tuesday, Jan. 23, as he led the Yellow Jackets to their 17th win of the season. (File)

VINCENT – Trailing 12-10 at the end of the first quarter, Vincent outscored Winterboro 27-15 over the middle two quarters of the game to take control as the Yellow Jackets went on to pick up their 17th victory of the year in a 52-45 win over the Bulldogs.

Winterboro came into the game having won seven consecutive games, including a two-point victory over Vincent back on Dec. 29, 2017. The Yellow Jackets, who have yet to lose on their home floor this season, were able to avenge that loss and pick up their fifth consecutive win since losing to Montevallo in the Jefferson-Shelby Hoops Classic.

Senior guard Zavien Kelley was a big reason the success was there for Vincent on a night where the field goal percentage was just 37.5 percent for the team.

Kelley posted 17 points, five rebounds, three assists and two steals in the game, but more importantly shot 7-11 from the field, including 1-2 from beyond the arc.

His 7-11 shooting was good enough for 63.6 percent, while the rest of the team was just 11-37, which was only good enough for a percentage of 29.7 percent from the field.

The worst of those shooting performances as a team came in the first quarter as the Yellow Jackets made just four of their 12 field goals attempted in the period.

It led to Winterboro grabbing the early 12-10 advantage at the end of the quarter, but for Vincent to be down by just two points despite the shooting woes was a positive moving forward.

The second quarter wasn’t much better in the way of shooting from the field for the Yellow Jackets as they were just 4-11, but the free throw line became key.

Vincent was able to knock down five of their seven attempts from the free throw line in the quarter and also knocked down a 3-pointer to outscore the Bulldogs 14-10 in the period and take a 24-22 lead into the half.

The Yellow Jackets carried that momentum of grabbing the lead into the second half and let their defense take over.

Vincent was able to limit Winterboro to just five points in the third quarter, while scoring 13 points of its own. A big reason for the success in the quarter was the game-high 12 rebounds the Yellow Jackets were able to grab, which gave the Bulldogs no second-chance points.

Having played a strong defensive quarter, they laid the hammer down in the final period with their offense as shots finally started falling.

Vincent went 5-10 from the field in the fourth quarter and hit five of their 11 free throws to preserve the 52-45 win.

With the victory, Vincent improved to 17-5 on the season and still sits at 2-0 in area play with two area games separating them from the regular season area title and a spot in Regionals.

Aside from Kelley’s 17, Chris Hardie had another strong performance in the post grabbing a double-double with 10 points and 14 rebounds, while grabbing five steals as well. Jackson McGinnis added a third double-figure scorer with 10 points of his own, while also blocking four shots.

Calera jumps in, Helena and Vincent move up in latest poll

By ALEC ETHEREDGE | Sports Editor It’s been since early in the season that the county has had three teams... read more