Jefferson County Sheriff’s Office Deputy Officer Ken Bailey recently announced his candidacy for Shelby County Sheriff. According to Bailey, this is his third time to run for the office. 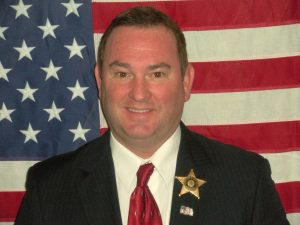 For Bailey, one of the biggest issues facing Shelby County is the opioid epidemic, which he said has contributed to much of the local crime that has occurred over the years. He said he disagrees with current Shelby County Sheriff John Samaniego’s decisions to combat the issue.

“The opioid epidemic has gotten out of control,” Bailey said. “Samaniego got rid of the canine unit and got helicopters. It’s small things like that that make no sense. He’s wasted taxpayer funds with little to no results.”

If elected, Bailey said he plans to reinstate the canine unit, instate a drone unit and make sure every school in the Shelby County district has a resource officer.

He also said he wants to train SCSO deputies to handle car accidents, instead of relying on state troopers from the Alabama Law Enforcement Agency.

“It’s not a hard procedure,” Bailey said. “If we have the manpower, this would be another great way to serve Shelby County.”

He said his experience in the Joint Interagency Task Force, where he worked with the DEA, FBI, CIA, Customs and Border Protection and Immigration and Customs Enforcement to stop the shipment of drugs from Central America to the United States is part of what qualifies him to fight the drug epidemic as Shelby County Sheriff.

“Samaniego has never patrolled as a deputy,” Bailey said. “He was a friend of (former county sheriff) Chris Curry, who brought him in as a sheriff’s deputy.”

Bailey will run against Samaniego in the primary election on June 5. The general election will be held on Nov. 6. For more information about Bailey’s platforms and campaign, visit Bthesheriff.com.

“His core political values are taken from the Declaration of Independence, the United States Constitution and the Bill of Rights,” read a press release from his campaign. “He believes that all people are created equal and all have the right to enjoy their lives and the freedoms that this great country has to offer.”