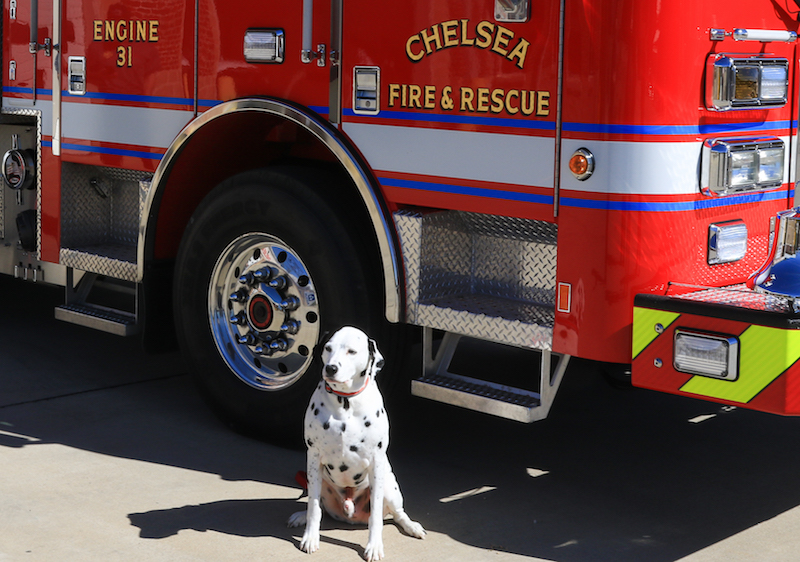 CHELSEA – After his recent retirement in December, the former Chelsea Fire and Rescue fire dog, Hero, is reportedly spending his days relaxing and enjoying life.

“With this cold front we’ve had, he’s just been laying in front of the fireplace,” Lieutenant Don Williamson said. “He’s really living it up in his retirement.”

Hero made his last public appearance at the annual Chelsea Christmas parade on Saturday, Dec. 16. According to Don Williamson, who served as Hero’s handler and has since adopted him, Hero had been a part of the fire department for nine years when he retired.

“The plan all along was, when he retired, I’d keep him at home,” Williamson said. “Right now, he’s just a good pet.”

According to Williamson, the fire department brought him on as the fire dog in 2008, when he was only 1 year old. Hero was trained by Creative Dog Training of Homewood, and was specifically chosen because of his temperament around children and the fact that he is a purebred Dalmatian.

“We didn’t have all of the puppy issues,” Williamson said. “It made it a lot easier for us to train him.”

As fire dog, Hero was the ambassador for Chelsea Fire and Rescue’s “Our Firehouse Dog” program, which taught fire safety procedures to kids in schools, pre-schools, daycares and at public events.

“What’s really neat is that students who go to Chelsea High School and have already graduated grew up with Hero,” Williamson said.

Williamson said the decision on Hero’s retirement came after firefighters noticed that his attention span was getting shorter and shorter. Recently, Hero turned 10 years old, which Williamson said is the equivalent age of 70 in human years.

“In the first several years, we could take him out for public events and we could keep him out for three or four hours,” Williamson said. “(The trainer) told us that we would know when it was time to retire him, and we knew.”

Although he and other firefighters discussed getting a new fire dog, Williamson said the fire department ultimately decided against the idea.

“We came to the conclusion that the program was successful for nine years because of who Hero is,” Williamson said. “He cannot be replaced.”