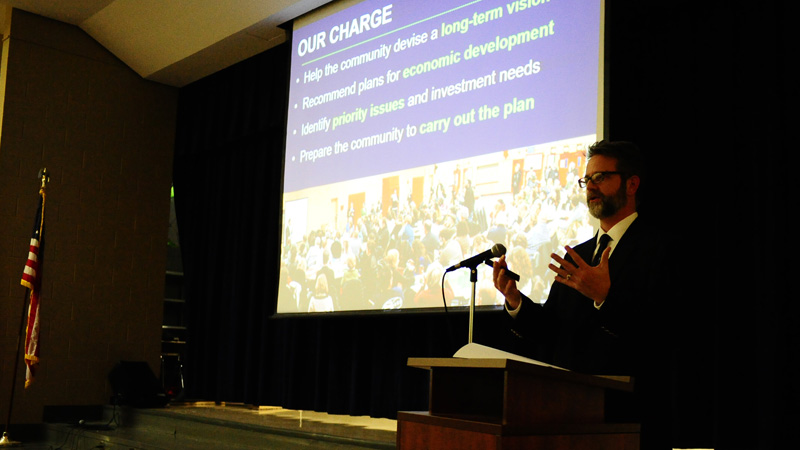 Jason Fondren of KPS Group, which is helping the city of Hoover draft a comprehensive plan, speaks at a Future Hoover town hall meeting on Jan. 25 at Greystone Elementary School. (REPORTER PHOTO/STEPHEN DAWKINS)

HOOVER – Greystone and other communities on the eastern side of Hoover sometimes seem disconnected from the city and hope the city’s forthcoming comprehensive plan will address the issue.

About 20 residents voiced their opinions to Hoover city officials at a town hall meeting on Thursday, Jan. 25, at Greystone Elementary School that was part of the Future Hoover initiative.

Solutions to traffic on U.S. 280 and amenities including a library, ball fields and community meeting space would be welcome in the area, residents said.

Hoover Mayor Frank Brocato welcomed those in attendance at the meeting and then introduced City Planner Mac Martin, who said the meeting—the first of three scheduled through early February—is part of the effort’s second phase of public input.

“We want to hear your thoughts and dreams for what you want Hoover to look like, feel like in the next 20 years,” Martin said.

A community assessment performed in fall 2017 was the first phase, and Jason Fondren of KPS Group, which is helping the city formulate a plan, went over results of the assessment.

“The plan should make things better but be done in a way that is fiscally responsible,” Fondren said.

A proposed plan could be presented to the city in August or September.

-Hoover has grown at an average of about 2,000 residents per year since 1970, with single-family homes overwhelmingly the vehicle of growth.

-The rate of growth has slowed since the 1990s.

-Cost of living in Hoover is below the national average, with the median monthly mortgage payment at $1,218.

-About 56 percent of residents have a bachelor’s degree or higher, making Hoover more educated than state and national averages.

-Hoover has a low unemployment rate of about 2.5 percent.

-Hoover Fire Department maintains an ISO rating of 1, which is the best possible rating; and the city’s crime index is below the national average and falling.

Attendees were encouraged to take an online survey that can be found at FutureHoover.com.

Early results of the survey, with about 300 responses received, include:

-About 90 percent of respondents said the quality of life in Hoover is good or excellent.

-Almost two-thirds of respondents said traffic issues are reducing their quality of life.

-Issues important to the city’s future are schools, economic development, public safety and sense of community.

After the presentation, attendees were allowed to voice their opinions about issues through a series of questions, such as what about the city is above or below their personal standards.

Residents said they chose to live in Hoover because of the schools, affordability and the Greystone community specifically.

They said city assets that meet their standards include shopping, public safety, the library, location and landscaping; while areas that need work include a lack of amenities on the eastern side of the city, poor lighting on major thoroughfares and the appearance of the U.S. 31 corridor.

The next Future Hoover town hall meetings are on Jan. 30 at Shades Crest Baptist Church and on Feb. 6 at Hoover City Hall, with both meetings lasting from 6:30-8 p.m.