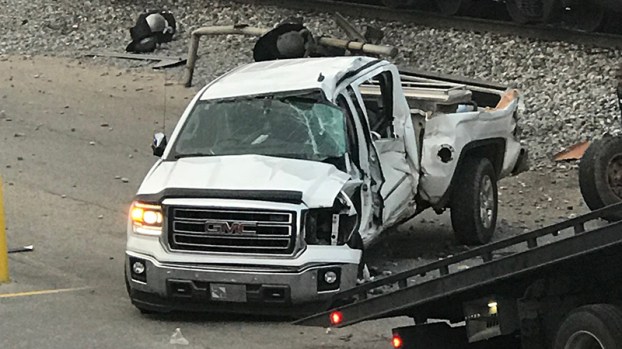 A train collided with a white GMC pickup truck at the crossing behind the Alabaster Police Department on the morning of Jan. 26. (Contributed/Gene Rowley)

The crash happened at about 6:20 a.m. when a CSX train struck a white GMC pickup truck, heavily damaging the truck and tearing down one of the signals at the crossing. The crossing had light signals, but no crossing arms.

Because the train was required to stop after the crash, it was also blocking the high-traffic intersection at U.S. 31 and Alabama 119.

“Alternate routes: The crossings on Industrial Road at Highway 31 and on Fulton Springs Road are open. There will be heavy traffic in these areas. Please use caution,” read a post on the Alabaster Police Department’s Facebook page.

The driver of the pickup truck was extracted from the vehicle by the Alabaster Fire Department and airlifted to a nearby hospital. No fatalities were reported.