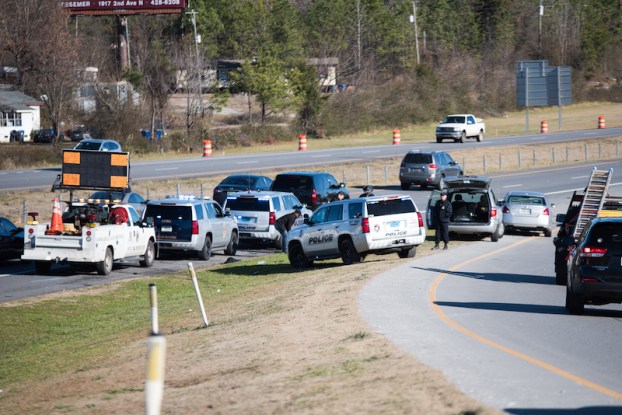 A portion of I-65 northbound was shut down while state troopers worked the scene of an accident where a pedestrian was killed during overnight hours. (Reporter photo/Keith McCoy)

ALABASTER – Troopers from the Alabama Law Enforcement Agency recently responded to reports of a fatal accident near the northbound lane of Interstate 65 in Alabaster on the morning of Monday, Jan. 29. According to the ALEA, the body of a pedestrian was discovered between I-65 northbound and exit 238 shortly after daybreak.

According to the Shelby County Coroner’s Office, the victim was identified as 47-year-old Kyle Dewayne Mixon of Alabaster. County Coroner Lina Evans said Mixon was struck and killed by a vehicle after attempting to cross the interstate during overnight hours.

“He had on some dark colored clothing,” Evans said.

Evans said she was unable to release the details of Mixon’s injuries, but it is likely that he died as the result of blunt force trauma.

After hearing reports of the accident on the radio, Evans said the driver who hit Mixon immediately notified authorities. The driver said they thought they had hit a deer at the time of the incident, and did not stop to investigate. No charges have been pressed against the driver, who is said to be cooperating with investigators.

“They believe it was a true accident,” Evans said.

The Alabaster Police Department closed a portion of I-65 northbound while troopers were at the scene. All lanes on I-65 in Alabaster have since been reopened.

According to the ALEA, troopers are continuing to investigate the accident, and the findings will be presented to the Shelby County District Attorney’s Office.