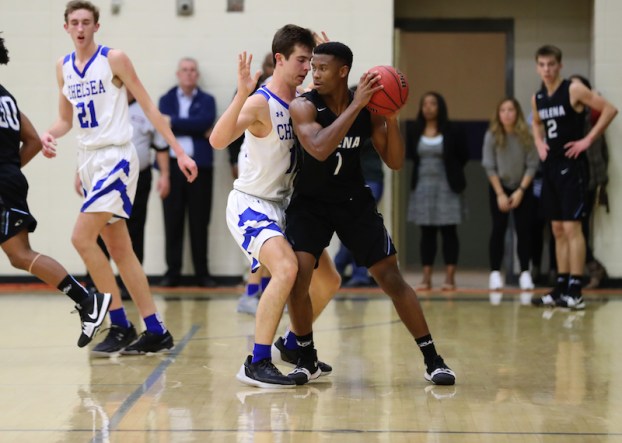 Helena’s Justin Stuckey (1) finished with 18 points to lead all scorers to help the Huskies win the regular season area championship. (For the Reporter/Cari Dean)

CHELSEA–It was just late January, but the atmosphere inside the Chelsea High School gymnasium had more of a tournament-like feel when the Helena Huskies and Chelsea Hornets clashed on Friday, Jan. 26.

The gym was packed for good reason, as a win for Helena clinched the Class 6A Area 8 regular season championship and a win for Chelsea meant the winner of the area would be determined by coin flip.

In the locally televised game, Helena edged Chelsea in a back-and-forth low scoring affair 41-36 to improve to 25-2 on the season. The Huskies also guaranteed themselves a spot in the sub-regional round with the win.

This matchup lived up to the hype as both teams made it difficult for each offense to find the bottom of the basket.

The two players that did generate offense were Helena’s Justin Stuckey and Chelsea’s Tyler Coleman. Stuckey had 10 points while Coleman had eight in the first half as the Hornets took a 19-17 lead into the half.

Stuckey finished as the game’s leading scorer with 18 points and Coleman finished with a team-high 12 points for Chelsea.

The difference in this game came at the free throw line, as Helena went to the line 29 times and converted 23 of those attempts to average nearly 80 percent as a team.

Leading by just two entering the fourth quarter, the Huskies made 10-of-13 free throw attempts down the stretch to pull away for the win.

Up 39-36 with 27.4 seconds to go, Chelsea had one final try to send the game to overtime but a Coleman 3-pointer came up short. Daunte Cave calmly sank two free throws at the other end with four seconds left to seal the 41-36 win.

After the game, Helena head coach Chris Laatsch credited the win to toughness.

“Our motto all year has been toughness and that’s what we’ve been talking about and they had to be full of toughness tonight to win,” Laatsch said. “The environment was unbelievable and coach always has his team ready. They knew what we were going to do and they were prepared and guarded well. You have to earn every basket you get from them and they don’t give you anything easy. We had to have a bunch of toughness and resilience to fight through that physical game to end up being able to win and to me it’s just toughness.”

With the win, Helena finished a perfect 4-0 in area play and will now host the area tournament the week of Feb. 5.