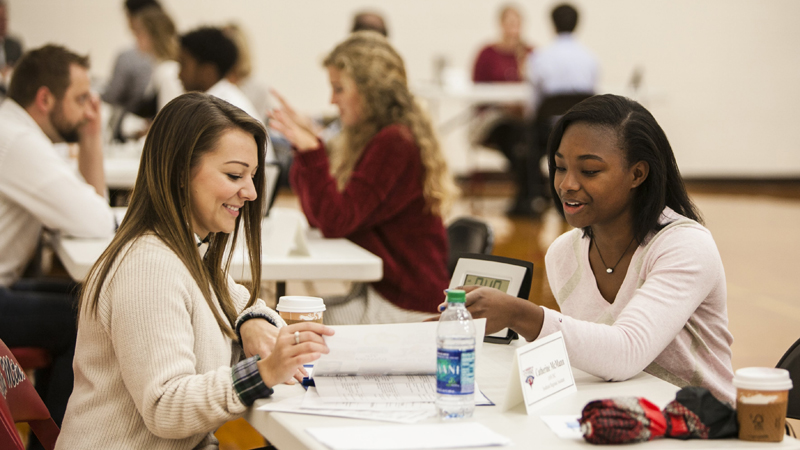 NORTH SHELBY – High schools offer resources to prepare students for their careers, and a program undertaken at Oak Mountain High School helps ensure the students are making the most of those opportunities.

During Freshman Focus, about 400 ninth grade students at OMHS studied careers that interest them and presented plans based on their findings to mentors from the community.

“The goal was for our students to present a plan of how they would be spending their next four years at Oak Mountain High School,” said Lauren Ingram, business education teacher at OMHS who also teaches career preparedness for freshmen along with Paula Hughes, Cindy Smith Jodie Temple and Riley White.

Shelby County Schools Superintendent Randy Fuller communicated to OMHS Principal Kristi Sayers a desire for student-led conferences for freshman, similar to the ones in which seniors take part, that would be geared toward the freshmen’s journey through high school.

“The focus was every freshman would have an opportunity to experience different careers and see what it would take to reach their goals—what they would have to do to make their dream job happen,” Hughes said.

“It was interesting to see some of the jobs I had never considered before,” Durrett said.

Fellow freshman Collins said the service detailed careers that students may not have even considered.

“It gives you a lot of specifics,” Collins said. “I knew I wanted to be a doctor, but I had no idea what kind of doctor I wanted to be.”

Career fields were suggested for students based on their personalities, work environment preferences and more.

After they picked a career, the students researched incomes, degree requirements and any other steps needed to be eligible for the job.

Class time during the second nine weeks was devoted to the project.

The portfolios included a four-year academic plan, assessment results, resume and cover letter, 10 academic goals, 10 personal goals and their career project highlighting a career they are interested in.

Wideman said most freshmen like herself have yet to take the steps necessary to applying for a job such as putting together a resume.

“Most people in our grade had never done that before,” Wideman said.

Finally, each student developed a 5-7 minute oral presentation they shared with 18 volunteer community mentors in December 2017.

The students were required to dress professionally and arrive promptly for their scheduled time.

“I think the big takeaway was the freshmen being able to go in front of an adult and tell them about their goals,” Temple said.

The mentors offered constructive criticism about the students’ plans and were even asked to assign a grade for the presentation.

Hughes said the most significant problem discovered during Freshman Focus is that the students may know what they want to do in the future, but they do not know how to get there.

“That’s where we’re trying to go with this,” she said.