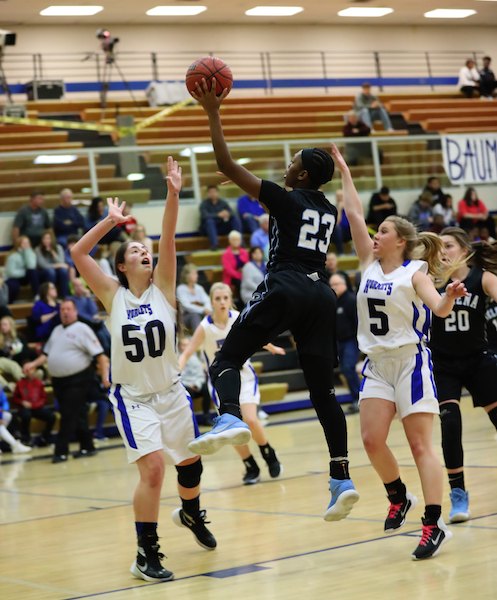 Helena’s Jordan Jones (23) finished with 36 points to lead all scorers against Chelsea on Jan. 26. The Huskies defeated Chelsea 69-66 to win the regular season area championship. (For the Reporter/Cari Dean)

CHELSEA–After blowing out Chelsea by more than 24 points four days prior, the Helena Huskies girls basketball team had a much tougher time with the Hornets the second go-round on Friday, Jan. 26, with the regular season area championship on the line.

With both teams sitting at 2-1 in area play, the game at Chelsea on Jan. 26, served as a winner-take-all scenario for the right to host the area tournament the week of Feb. 5.

In an exciting, high-scoring affair, Helena erased a 10-point halftime deficit to complete a 69-66 come-from-behind win on the road.

The first half was all Chelsea as Pressley Rains and Jordan Parker combined for 19 of the Hornets’ 32 points. Chelsea frustrated Helena on the offensive end holding the Huskies to just 22 points.

After making some halftime adjustments, Helena came out using full-court pressure in an effort to speed up the game and it worked to perfection.

In the third quarter, Helena outscored Chelsea 27-11 to erase the double-digit Hornet lead to take a 49-43 lead and wouldn’t look back in the fourth quarter.

Helena head coach Alan Skinner said he knew the game would be a war but the adjustments after halftime became the difference.

“We didn’t get the turnovers that we wanted to in the first half in our half-court defense which is what we’ve really focused on,” Skinner said. “They shot it really well tonight and we couldn’t turn them over and they found some matchup problems that we had so they were able to exploit those. It was about making adjustments and we realized if we were to really speed them up, and have people handle the ball who weren’t used to handling the ball and having people run to spots that aren’t used to running to those spots, we forced them to turn it over. Once we got the energy going and momentum it was easier.”

Brandis Lang was the third Helena player to finish in double-figures with 11 points.

This was the second straight year Helena has won the Class 6A Area 8 regular season championship and will be the third straight year the Huskies make it to at least the sub-regional round with Skinner as head coach.

Rains finished with 22 points to lead the Hornets while Parker had 17 points in the loss.