ALABASTER – A 31-year-old Pike Road man is back in the Shelby County Jail on his second felony aggravated stalking charge since 2016, after he allegedly told an Alabaster woman she would “pray for peace or death” if she reported him to police. 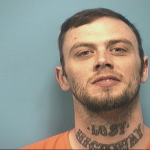 The Alabaster Police Department arrested Justin Tal Carpenter, who lists an address on Meriweather Road in Pike Road, on Jan. 27 and charged him with aggravated stalking, probation violation and violation of a domestic violence protection order enforcement act.

Carpenter’s charge came after he allegedly “intentionally and repeatedly followed and harassed” an Alabaster woman between November 2017 and December 2017 and told her “If you snitch on me and I go to prison, it will be 100 times worse” and “You’ll pray for peace or death.”

When he was arrested on Jan. 27, Carpenter was on probation for a previous aggravated stalking charge brought against him by the Alabaster Police Department in 2016. The 2016 charge involved the same victim.

According to Carpenter’s arrest warrant in the 2016 case, he allegedly continued to make contact with a victim despite an order from Shelby County District Court Judge Bill Bostick barring Carpenter from having contact with the victim.

Between Aug. 6, 2016, and Sept. 14, 2016, Carpenter allegedly continued to have contact with the victim despite the previous court order barring him from doing so.

“Defendant has violated a no contact order of the court several times without regard to the consequences, and in some cases, bragging that he is ‘untouchable,’” the Shelby County District Attorney’s Office wrote in court filings in 2016.

Carpenter currently is being held in the Shelby County Jail on bonds totaling $102,000, which is higher than normal for the charges at the request of the District Attorney’s Office.

“Defendant was released from Shelby County Jail (on the 2016 charge) on Nov. 4, 2017, and began contacting the victim within three weeks of his release,” read the DA’s Office request to set Carpenter’s bond higher than normal. “Defendant is a continued threat to the victim in the instant case as well as the community at large.”

First-degree aggravated stalking is a Class B felony, and is punishable by up to 20 years in prison upon conviction.

As of Jan. 29, Carpenter did not yet have a court date listed in Shelby County District Court.