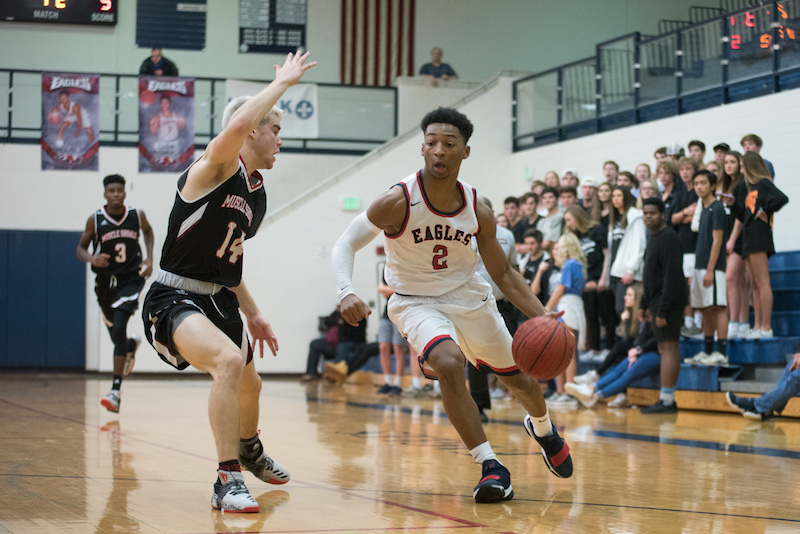 Oak Mountain's Zach Nelson was one of five Eagle players to finish in double figures in the win over Mortimer Jordan. (File)

NORTH SHELBY – The Eagles gutted out a big win Monday night, Jan. 29 as they downed the Mortimer Jordan Blue Devils 54-51.

Nothing came easy for Oak Mountain as their top gun Chris Mayweather found himself in foul trouble early in the first half, but head coach Chris Love was happy with what he saw from his unit in those tough opening moments.

“That bunch we had out there really did a heck of a job for us. Maintained the lead for us and guarded really well so it’s really encouraging going into the playoffs,” Love said.

After Mayweather committed his second foul with 2:15 remaining in the first quarter, the Eagles didn’t skip a beat getting multiple buckets from four other players.

Nelson scored all 12 of his points before halftime, and Oak Mountain finished the first half on an 11-3 run to take a 28-18 lead.

The second half saw the Blue Devils find their stroke from deep scoring on three consecutive shots from the perimeter to draw within two points midway through the third quarter.

However, Oak Mountain responded as Mayweather returned to score seven straight to begin another 11-3 run for the Eagles.

Nathan Jones capped the run with a smooth three from the

corner, sidestepping a defender and releasing the shot as the buzzer sounded ending the quarter.

“They kind of gave us some different looks defensively in the second half and we did a nice job of doing what we do offensively sharing the ball and getting some open looks that we were able to knock down,” Love said.

The teams continued to trade shots from beyond the arc in the fourth as the Eagles and Blue Devils hit six each, but Mortimer Jordan didn’t go away. Another 13-5 run closed Oak Mountain’s lead to 52-49, but Drew Dunn did his best Zach Nelson impression in the final half of play.

After going silent before halftime, Dunn scored all 11 of his points in the second half, including three of the team’s seven total 3-point baskets. His final basket came immediately after the Blue Devil’s final run to put the game out of reach.

Mayweather, though limited on offense, came up with several big rebounds and came up with the final steal to seal the win. Coach Love was impressed with Mayweather’s growth on the other side of the ball.

“I talked to him before the game and told him we needed a better defensive effort from him and he definitely gave it to us tonight,” Love said. “He’s a really athletic kid that sometimes doesn’t show on the defensive end, he can really get down and guard and I was proud of him tonight.”