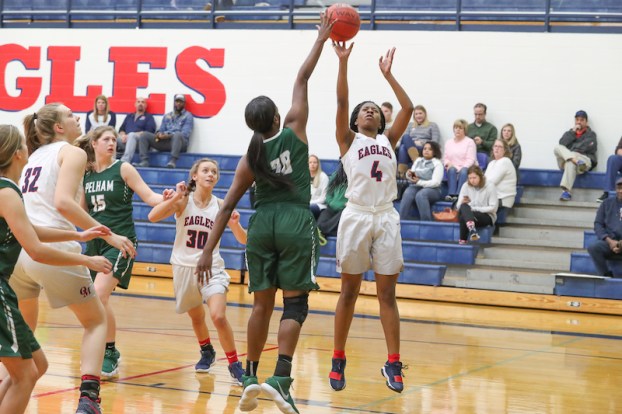 The Oak Mountain Eagles girls' basketball team was able to pick up a dominant 24-point win over Mortimer Jordan on Monday, Jan. 29. (File)

NORTH SHELBY – Oak Mountain’s girls basketball team picked up another crucial win Monday, Jan, 28 with area tournaments less than a week away. The Eagles met the Mortimer Jordan Blue Devils for the 4th time this season, but dominated their matchup from the start en route to an easy 56-32victory at home.

“We played really good zone offense tonight so we got it into the middle some, got it out to some shooters and made some shots early that got us going so that was good for us,” head coach Allen McGowan said.

Kailey Rory got the scoring started for the Eagles drilling her first shot from long range immediately stretching Mortimer Jordan’s zone defense. This opened up the paint for players like Cassady Greenwood who was able to score from just inside the free throw line as well as find open players running along the baseline near the basket.

Then Coach McGowan was able to bring in his not-so-secret weapon off the bench: 6-foot-5 sophomore center Hannah Edwards. The Blue Devils had no answer for Edwards who scored six points for Oak Mountain during its 13-0 first quarter run.

“She’s just a big presence down there and then we’re also able to go high-low with her a bunch of times in the first half to help open up the scoring,” McGowan said. “Then the presence on defense, she’s in positions to help make up for our mistakes on the edge.”

The Eagles led by double digits after the first quarter and never looked back.

Edwards ran into foul trouble in the first half, but Rory carried the Eagles to halftime scoring the team’s last seven points in the second quarter.

The second half began a bit slower as Oak Mountain bided it’s time with a big lead. Edwards returned later in the third quarter and showed off her range hitting from the top of the key and adding another layup giving the Eagles their biggest lead of the game at 38-18.

OMHS cruised into the fourth quarter, but took their foot off the gas as the Blue Devils scored six straight to cut the lead to 14. McGowan quickly called a timeout to halt the momentum swing.

“We just wanted to refocus and do the little things on offense,” McGowan said. “Sometimes we don’t set good screens, sometimes we’re not in the right spots so we just tried to give them something coming out of the timeout. Tried to get a good look and they refocused after that and we were fine.”

A refocused Eagles squad went on to finish on a 13-3 run to close out the game.

Hannah Edwards led the team with 14 points despite just 14 minutes of play while Kailey Rory and Cassady Greenwood finished with 13 and 12 points, respectively.

By SETH HAGAN | For the Reporter NORTH SHELBY – The Eagles gutted out a big win Monday night, Jan.... read more