Russell, Tran-Reno named two of top 48 players in the state 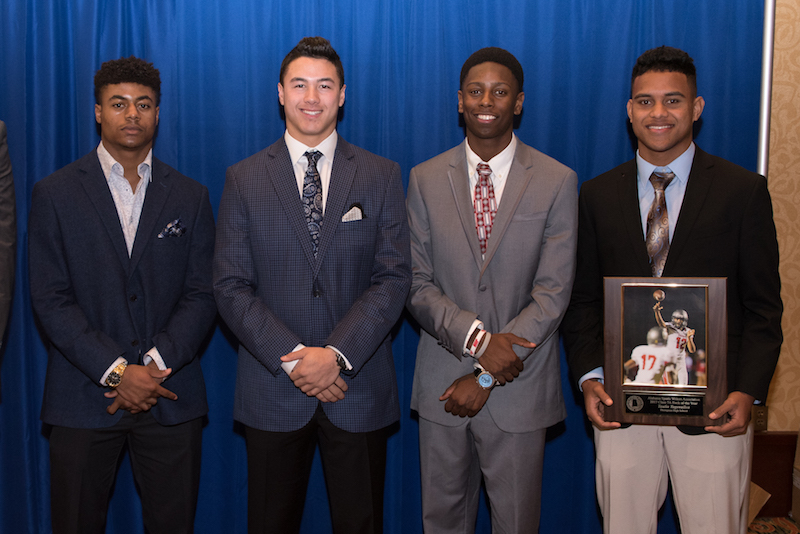 Briarwood's Gabriel Russell, far left, and J.R. Tran-Reno, second from left, were two of the six finalists for the Class 5A Back/Lineman of the Year awards. (Reporter photo/Keith McCoy)

MONTGOMERY – On a day where the focus was the Back/Linemen of the year as well as Mr. Football, there’s something to be said about the players that didn’t walk away with one of the top awards at the 2017 Mr. Football Banquet held at the Renaissance Hotel in downtown Montgomery.

While each classification came and went with awards being handed out to the top back and linemen from each, the Class 5A classification passed with both J.R. Tran-Reno and Gabriel Russell not having their names called for the top player on their side of the ball in their classification.

Representing the county alongside Thompson’s Ahmad Edwards and Taulia Tagovailoa, who won the Class 7A Back of the Year award, Tran-Reno and Russell both went home without a plaque rewarding their success.

While to some that may some harsh, their accomplishments both on and off the field for the Class 5A State Runner-ups speak volumes and don’t need plaques to establish them as one of the best players in the state.

Just being in the building was enough of an honor for the two as they sat alongside 48 of the best high school football players from the state of Alabama, making them two of the best 48 players in the state.

It also made them two of the best six players in the 6A classification and one of the three best on their specific side of the ball.

Russell, a linebacker for the Lions that looked like he was competing in the southeastern conference throughout the year by the way he ran sideline to sideline, is one of those players that impresses more in person than any player I saw this season.

The senior posted an unreal 171 tackles, 13 sacks and eight tackles for loss to leave a strong legacy with the Lions.

His counterpart on the opposite side of the ball was Tran-Reno, who was starting for the second consecutive season at the running back position as just a junior.

He posted video game type numbers during his junior season with 1,696 all-purpose yards and 28 total touchdowns. More impressively, he played just about every position possible on offense.

The perceived “running back” not only had 1,030 yards rushing, but tallied 543 receiving yards and 123 passing yards, while also averaging 30-plus yards punting the ball.

The two leaders led Briarwood to a 14-1 season and the state championship game where they lost a 14-13 heartbreaker to the St. Paul’s Saints in the final two minutes of action.

Tran-Reno will be back in 2018 to not only improve on his gaudy junior statistics, but look for redemption.

Whether it be on the football field or off, the two will carry the success from this season into a very bright future.