Vincent girls use balance in win over Fayetteville 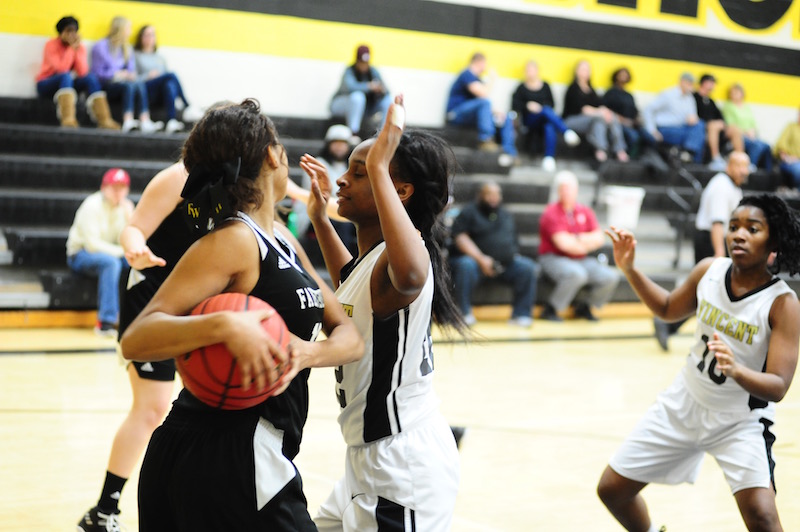 Vincent had five players score at least six points in a 47-26 win over Fayetteville on Monday, Jan. 29. (Reporter photo/Alec Etheredge)

VINCENT – Five players scored at least six points as the Vincent Yellow Jackets’ girls basketball team was able to handle Fayetteville with ease on Monday, Jan. 29, to improve to 13-11 overall this season.

Led by 13 from Aniya Norwood, Vincent was able to run away to a 47-26 victory over the visitors.

The strong balanced attack started in the opening period of play as the Yellow Jackets used four different scorers to put up 10 points in the quarter.

Fayetteville, however, came out firing as well and posted its best quarter of the game in the first eight minutes of the contest.

Behind two 3-pointers from Jayae Smith and Graysh Hughes and five total points from Smith, the Wolves were able to score 10 points of their own to tie the game at the end of the first quarter.

The second quarter was much different, specifically on the defensive end, as Vincent turned up the pressure. While the offense was still able to post 12 points in the quarter behind four more scorers, the defense stepped up and limited Fayetteville to just four points in the period.

Charity Childs hit two jumpers for the wolves in the quarter, but those were the only two points the Yellow Jackets gave up in the quarter as they took a 22-14 lead into the half.

Vincent saved its best offensive production for the second half as they combined for 25 more points.

It started with the Yellow Jackets’ most productive quarter on that end of the floor in the third quarter when they were able to put up 13 points behind five points from Norwood and four from Tion Wright.

Vincent gave up just eight more points in the period thanks to three missed free throws from the Wolves and just three made jump shots. The Yellow Jackets took advantage extending their lead to 35-22 lead into the final quarter.

Both sides of the floor treated Vincent well in the fourth quarter as well. The Yellow Jackets were able to post 12 more points thanks to two 3-pointers from C Dates.

Vincent stepped up again defensively and posted its best quarter of the game on that end of the floor by limiting Fayetteville to just four points in the final eight minutes of action.

Having finished 2-2 in area play with the area tournament taking place the week of Feb. 5, the win gives Vincent some end of the season momentum as they look to be playing their best for a playoff push.

Aside from Norwood’s 13 in the game, Vincent got double-digit points from Zhari Posey, who finished with 12 points. Makayla Cohill added eight points and six steals, while Dates and Wright both had six points.