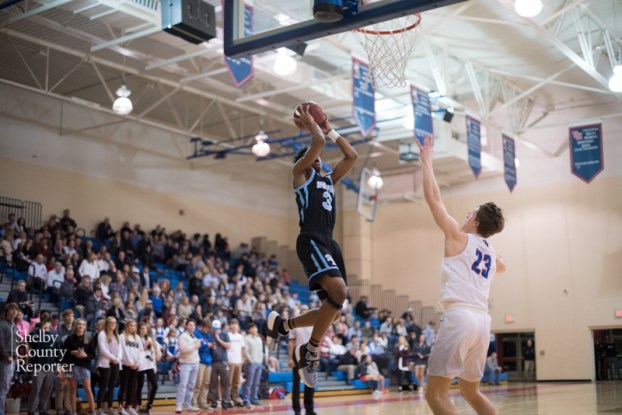 VESTAVIA – For the second straight game the Spain Park Jaguars put a serious scare into a heavily favored opponent, but the heartbreak from the most recent game will take a mentally tough effort moving forward.

After holding a lead at the end of the first three quarters on the road, the Jags were sent home with a last second buzzer beater as Vestavia Hills stole the win, 53-51.

Spain Park’s defense was magnificent, particularly in the first half as their 2-3 zone baffled the Rebels and kept them from getting to the paint. Relegated to the outside, Vestavia found life difficult and didn’t make a single 3-pointer.

The Jags led 13-4 after the first quarter and rode the hot hands of DayQuan Williams and Parker Boswell.

The two kept the Rebels at bay, scoring 10 points each in the first half and combining for four 3-point baskets. No one else for SPHS could score, but nevertheless Spain Park maintained a 25-17 advantage heading into halftime.

It was just a matter of time before the Rebels made their run at home and they wasted no time out of the gate in the third quarter.

Led by Luke Champion, Vestavia Hills reeled off 16 consecutive points and what was an eight-point halftime deficit transformed into an eight-point lead at 33-25.

Despite their shooting woes, the Jaguars stayed mentally engaged in a hostile environment.

Boswell scored six of his team-high 21 points in the third quarter as Spain Park rallied with a 13-3 run to end the period.

A slim lead at 38-36 set up a tense and physical fourth quarter.

The Jags struggled again to get baskets in the opening minutes, but stayed aggressive and found themselves in the bonus with 6:17 to go. They went to the charity striped eight times before their first bucket, but it kept them within striking distance.

The final frame featured five ties, four lead changes and 24 free throws as the teams battled back and forth. Spain Park held a 50-46 lead after a Boswell free throw, but would only score one point from then on.

The Rebels were aggressive as well penetrating the Jaguars defense in a switch of pace from their conservative first half.

They hit five of their last six free throws to draw even with Spain Park at 51 all and used a full court press to force the Jags’ only turnovers of the quarter.

Running the clock down to six seconds, Chip Culpepper got the shot he wanted, but it careened off the rim into the waiting hands of Champion who dashed down the court.

Dodging Jaguar defenders, Champion sped to the middle of the lane and lifted a game-winning floater that sank through the net as the final buzzer sounded sending the home crowd into a frenzy on Senior Night.

Boswell, Williams and Walton scored all but eight of Spain Park’s 51 points in the heartbreaking loss.

By SETH HAGAN | For the Reporter VESTAVIA – Just days after finishing with a perfect area record for the... read more