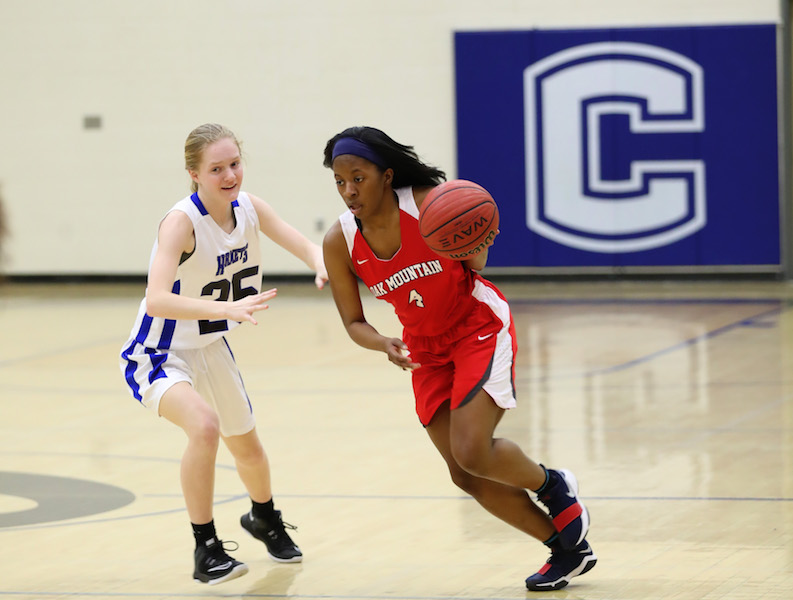 Oak Mountain's girls were able to pick up a 52-38 win over Chelsea on Tuesday, Jan. 30, thanks to seven different scorers in the game. (For the Reporter/Cari Dean)

With Spain Park, Mountain Brook and Huffman all sitting inside the Class 7A top 10, Oak Mountain had a tough go of it in area play finishing 0-6 for the season, which gave them the No. 4 seed in the upcoming area tournament on Feb. 7.

Outside of area play, however, the Eagles have proven to be a tough opponent with an overall record of 15-10 this season, making them 15-4 outside of the area, which shows they can get hot and upset somebody.

The 15th win of the season came on Tuesday, Jan. 30, when Oak Mountain traveled just a few miles up U.S. Highway 280 to take on rival Chelsea in a county matchup.

Oak Mountain was able to get off to a flying start against the Hornets by scoring a combined 30 points in the first two quarters.

Jordan Parker was the only reason the Hornets had any points in the quarter as she hit three jump shots for all six of her team’s points in the first eight minutes of action.

In the second period, the strong defense continued, but the offense lit up even more.

The Eagles hit two more shots from beyond the arc, but hit a total of seven baskets in the quarter, including an and-1 from Ta’Niyah Smith.

While the offense was on fire and scored 17 more points in the frame, the defense made Chelsea have to work for every basket.

It led to Chelsea having to earn points at the free throw line rather than get open looks and easy baskets. The Hornets shot 10 free throws in the quarter and made six of those attempts, while knocking down one jumper for eight points in the quarter.

Oak Mountain was able to extend its halftime lead to 30-14 thanks to the strong effort on both ends.

The third quarter was the quietest of the four as the Eagles’ defense continued playing well and limited Chelsea to just six more points, while scoring 10 themselves to extend the lead to 20 points at 40-20 heading to the final period.

Chelsea was able to make a bit of a run in the fourth and eventually cut the lead to 11 points thanks to strong play from Hope Richard, who went to town in the post as the senior played her final home game on senior night.

She played the final eight minutes on her home floor extremely well posting nine points in the period to draw the Hornets within striking distance.

Richard and Parker combined for 13 points in the final quarter as they shot a perfect 9-9 from the free throw line. It led to 18 points for Chelsea, but Oak Mountain was able to add 12 points of its own, which was plenty for the Eagles to hand on for the 52-38 win.

Oak Mountain was led by Kailey Rory with 15 points in the win, while Reed added 10 points as well. A total of seven different players scored for the Eagles.

Parker led Chelsea with 18 points, while Richard ended the night with 12 points.