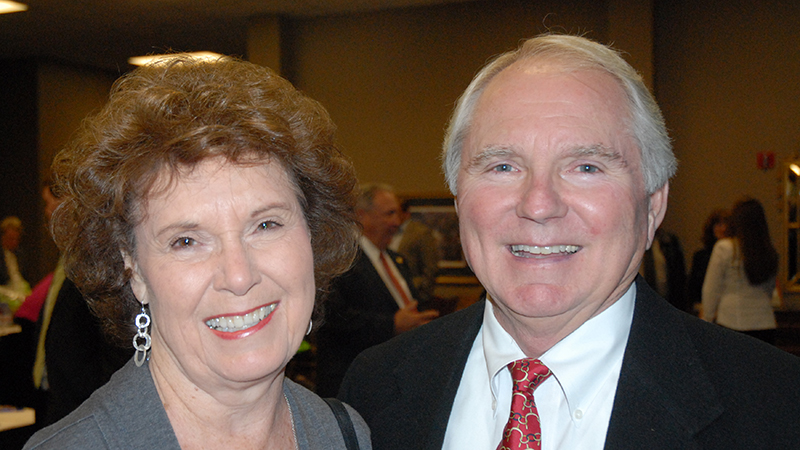 Allen Fulton and his wife, Betty, at a previous Salvation Army fundraiser dinner. Fulton, who was beloved by many in the community for his contributions to the county's education system, died on Jan. 31 at the age of 74. (File)

MONTEVALLO – Allen Fulton’s list of accomplishments during his 74 years on earth is extensive, but those who knew him well said one trait played a major role in everything he did: An innate ability to recognize and foster the potential in people.

Fulton was known for many things in the community, and touched thousands of lives between his birth on Aug. 22, 1943, and his death after a yearlong battle with brain cancer on Jan. 31.

After graduating from Thompson High School in 1961 and earning his bachelor’s degree in secondary education from Alabama College in Montevallo in 1965, Fulton taught for one year at Handley High School in Roanoke before returning to Shelby County as a government and economics teacher at THS.

While at THS, he obtained his master’s degree in administration and supervision from the University of Alabama, was promoted to THS assistant principal and then became principal in 1971. Fulton left THS in 1985 and moved into the central office of the Shelby County Board of Education, where he served the students and families of Shelby County in positions of increasing responsibility until he retired as assistant superintendent of operations in 2000.

Fulton also was instrumental in helping to found the Developing Alabama Youth Program in 1982, which serves at-risk adolescents and their families and has been used as a model for education in other communities. The Alabaster-based DAY Program is still going strong in Shelby County, and serves students from throughout the county.

“He was so well-connected. Back then, there were only about 60,000 people in Shelby County, and Allen knew everybody and everybody knew. He was loved by everybody,” Smith said. “Back then, there weren’t a lot of options for kids who needed some individualized attention, and as a principal, he saw that. The DAY Program was a way for Allen to work with those kids to get them what they needed.

Allen was a lifelong member of First Presbyterian Church of Alabaster and was ordained to the Church Session in 2016.

“He was an avid rider of Tennessee walking horses for five decades, a lover of music and an excellent dancer,” read his obituary. “He is remembered by friends, family, and thousands of former students for his brilliant smile, his generous nature, his sage advice and an unwavering ability to see potential in everyone.”

During his life, Fulton made many lifelong friends, including current Shelby County School Superintendent Randy Fuller and Board of Education member Peg Hill.

“He was always a friend to education. He didn’t just support students, but teachers and employees as well,” Hill said. “He was always giving of himself, his time and his energy to help others.”

“He has been a leader of Shelby County Schools for a long time. He had a wealth of knowledge, and he was a servant leader who was always helping others. He always had a smile on his face,” Fuller said. “He accomplished so much in his life, and he will be sorely missed.”