“The little church with the big heart” — that’s the slogan outside St. Andrew’s Episcopal Church in Montevallo.

The 50-member parish across the street from Montevallo High School opens its doors to all—24 hours a day, seven days a week. 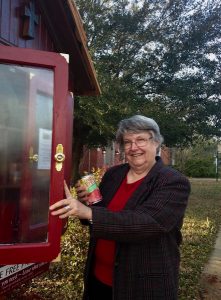 It also gives away clothing to anyone who needs some, and it makes food readily available ‘round-the-clock from its curbside “Blessings Box.”

Dr. Sally Smith, senior warden of the church’s vestry, said that St. Andrew’s Wardrobe has been operating for about a decade.

“We accept donations of gently used clothing from the community,” she said. If you have something you want to donate, she said, “the church sanctuary is open, and items can be placed on the back pews.”

Most needed, she said, are items for children and for men. The wardrobe is open on the third Saturday of each month from 8 a.m. until noon.

“Everyone is welcome to take as much as they need for themselves, family members or others in need,” Smith said. The ministry typically serves 25-30 “guests” each time, “with the biggest crowds coming when the weather is turning cold.”

The hall where the clothing is distributed is furnished with more than a dozen long folding tables where clothing is grouped according to whether it is men’s, women’s and children’s attire. Some guests are repeat visitors, she said, while others who come to get clothes later return with clothes to donate.

The Blessing Box is designed to serve the homeless or anyone else who needs food, she said. Built by a church member who wants to be anonymous, the “little free pantry” looks like a miniature church with red doors. About three feet wide and four feet tall, it is mounted on a post near the corner of Oak and Plowman streets.

Smith took a can out of the box and displayed its top—the kind with a ring that allows it to be opened without a can opener.

“Few homeless people have can openers,” she said. There is a concrete bench next to the box where a person can sit and eat straight from a can if he chooses, she noted.

The doors on the box are left unlocked all the time so that donations can be left and provisions obtained any time of the day or night.

“The idea is a simple one of neighbors helping neighbors,” Smith said. “Little Free Pantries or Blessing Boxes have sprouted in communities large and small from Aukland, New Zealand, to Montevallo.”

The UM program to train teachers for the deaf and hearing impaired is the only such program in the state.