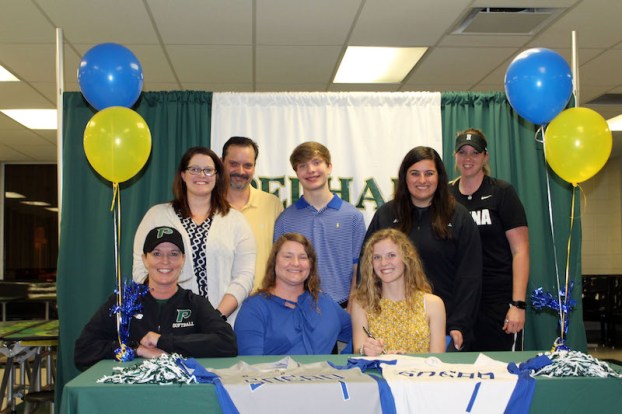 Pritchett to take eagerness to learn to college softball team

The diverse array of supporters surrounding Hannah Pritchett at her softball signing this week revealed the complex tapestry that this young woman represents. An eager student and hard worker, Pritchett believes in challenging herself.

As a student in my Advanced Placement Language Arts class last year, Pritchett worked hard; she was committed to her work and eager to learn.

At her signing, Pritchett’s coaches detailed her determination to excel as an athlete. As her coaches spoke of her speed, her skill and her confidence, I remembered the humble young woman in my classroom who often deferred to others. With sports, measurement is quantifiable—the best time, the highest batting average, the wins and losses. Pritchett appreciates the certainty those numbers represent; however, this young woman also admits that she has “always found beauty in art.”

“I was never an artist who could draw,” Pritchett said, “but taking photography with Mrs. Hinds this year has revealed how much I love photography—and how much more I have to learn. I love the fact that I inspire people with my photos. Photography allows me to move people without having to use a colored pencil or a paint brush.”

Softball was the sport Pritchett hoped to play in college—so much so that she chose to give up volleyball her junior year. For her senior year, she went back out for volleyball to becoming a member of Pelham’s 6A State Championship Volleyball team.

“I knew this was the program and the school where I could attend and grow as a person, a student and an athlete,” Pritchett said.

Representing Pelham’s diverse strengths—spirituality, a strong family, academic rigor, athletic prowess and, this year, the delight of discovering photography, Hannah Pritchett’s eagerness to learn launches her into the life she has imagined.