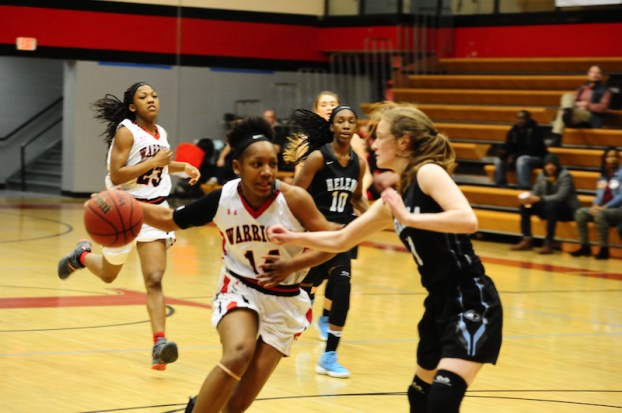 The Thompson Warriors got a big win on senior night on Jan. 30 by defeating the Helena Huskies 59-36. (Reporter Photo/Graham Brooks)

ALABASTER–It was a happy senior night for the Thompson Warriors girls basketball team on Tuesday, Jan. 30, as they picked up an impressive 59-36 win over the visiting Helena Huskies.

Thompson’s two seniors Kahyanne Bolton and Makayla Hawkins were honored after the game as they combined for 27 of the Warriors 59 points in a game Thompson never trailed.

The Warriors held a 28-21 advantage going into halftime and did most of its damage in the third quarter.

Thompson went on an 18-6 run in the third quarter as Bolton scored eight of her 20 points during this timeframe to lead all scorers.

Helena’s leading scorer Jordan Jones finished in double-figures with 13 points but it wasn’t near enough as no other Huskies recorded double-figures.

Leading 46-27 at the end of the third quarter, Thompson never let off the gas and cruised to a 23-point win.

Bolton led the way for the Warriors finishing with 20 points to lead all scorers. Brooklyn Oden also chipped in with 14 points to finish in double-figures.

Both Helena and Thompson will now look to play well in the area tournaments the week of Feb. 5. Thompson will face Tuscaloosa County on Feb. 7 while Helena will play the winner of the Pelham-Chelsea game in the Class 6A Area 8 championship game on Feb. 9.