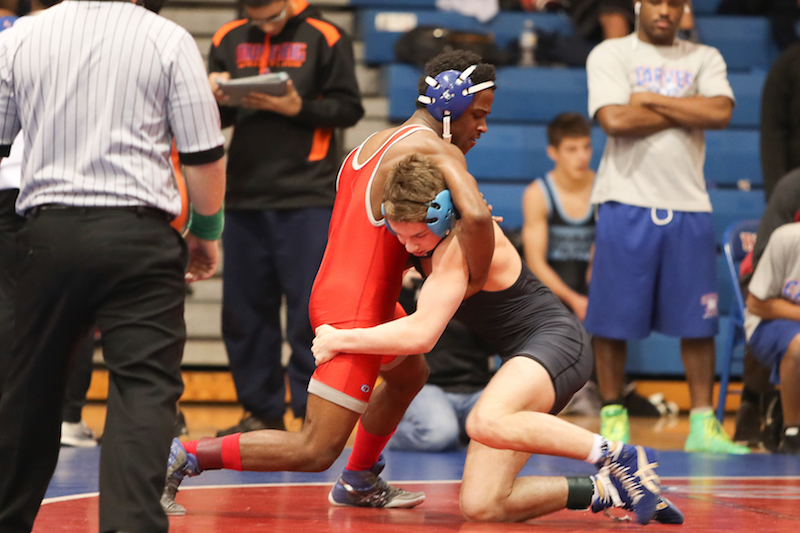 Several wrestling teams are gearing up for the postseason and competing in final matches to be prepared for a playoff run. (For the reporter/Dawn Harrison)

With the wrestling Super Sectionals happening on Friday, Feb. 9, the 2017-18 wrestling season is in its final week of regular-season competition as teams look to put together a run to the state championship.

Below is a roundup of how several local teams fared in some of their final matches of the season between Jan. 30 and 31.

Coming off an AHSAA 7A Duals loss on Saturday, Jan. 27, the Thompson Warriors got back to their dominating ways on Tuesday, Jan. 30, with a 59-18 win over the Pelham Panthers.

Using some of its B-team wrestlers, the Warriors got pins in five different matches from Blaise Albarado, Jax Scholl, Jacob Mehmen, Jeremiah Coney and Travis Wilson.

Pelham picked up pins from Cason Tyler and Joseph Chimento for 12 of the Panthers’ 18 points.

Oak Mountain took to the mat on Jan. 30 and 31 against Auburn and Hoover going 1-1 between the two matches.

Against Auburn, the Eagles were able to use pins from Joseph Tolbert, Cole Thomas, Sullivan Tipton, Brett Cruce, Leyton Bice, Barrett Blakely, Jacob Goldfon and Jordan Davis. Those eight wrestlers combined for 48 of Oak Mountain’s 57 points in the match.

The next night, the Eagles squared off against rival Hoover and weren’t as fortunate. Neither team really dominated the matchup, but Oak Mountain was only able to pick up one pin from Blakely, while the Bucs had four pins in the match.

The Chelsea Hornets competed in the Oxford tri match on Tuesday, Jan. 30, at Oxford High School where they took on both Oxford and Pell City.

In the first matchup with the host school, Oxford was able to win rather handily by a final score of 54-18. The Hornets won just four total matchups in the match and were unable to pick up any pins. Sam Ingram and Hunter Guarnieri both picked up decision wins, however.

In the second matchup with Pell City, Chelsea fared much better as they were able to take down the Panthers by a final score of 59-20.

The Hornets ended up getting pins from Brantley Ledbetter, Eli Padgett, Guarnieri, Elliot Gage, Joshua Gore, Wesley Pouncey and Jackson Jones in the match. Those seven wrestlers combined for 47 of Chelsea’s 59 points, while they went on to pick up wins in 10 of the 14 weight classes.

The Helena Huskies also competed in a tri match on Jan. 30, and like Oak Mountain in its two matchups and Chelsea in its tri match, the Huskies split their two matchups for the day.

The first of the two was against McAdory and featured a tight contest, but the Yellow Jackets ended up pulling out a 45-30 win. McAdory 45, Helena 30 and Helena 54, Montevallo 18.

Helena actually out-pinned McAdory five to two, but the Yellow Jackets were able to pick up 18 additional points off of forfeits and one match on time. Those three matches ended up being the difference in the final score.

Justin Yunke, Alex Miller, Chris Miller, Nathan Dunaway and Scott Yunke were the five to pick up fins in the first of two matches for the Huskies.

In the second matchup with Montevallo, Helena was able to run away with a 54-18 win over the Bulldogs.

A big reason was the seven forfeits that took place due to Montevallo not having a complete team for every weight class.

Cole Dennis, Ariel Suarez and Logan McLaurin were able to pick up pins for Montevallo as they won three of the five matches that actually took place.

Dunaway and Justin Yunke were able to pick up pins for the second consecutive match for Helena.