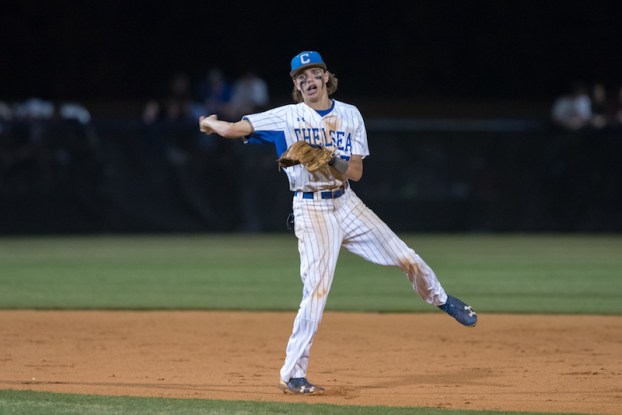 Chelsea will return an extremely talented group of upperclassmen to its 2018 baseball team, while its lone underclassmen is already committed to Auburn. (File)

CHELSEA – The Chelsea Hornets went from a 12-win team in 2016 to a 27-win team and a spot in the quarterfinals of the playoffs during the 2017 baseball season and now a gaudy group of 23 upperclassmen is back and ready to lead the 2018 Hornets to the promise land of a state championship.

“This group loves the game, especially now that we are back in the full swing of things,” head coach Michael Stallings said. “They are a good group and I’m excited about this year. They haven’t proven it yet on the field, but there are a lot of good baseball players on this team man.”

Stallings said this team is every bit as talented as last year and possibly better, but there is still a lot to see on the field from this year’s squad before he knows exactly what to expect.

“Last year’s team worked really hard, but they also as a team they had a lot of unity, which made them more talented,” Stallings said. “They were a tight group and that has carried over with the number of guys we have returning this season.

“As a coach, the biggest challenge is figuring out their identity and to make sure they have that bond and unity. Luckily with this group seeing that last year and becoming so close they already have that and that’s one of the positives going into this year.”

One of the most exciting parts to Stallings is that returning cast of players that helps make his job easier.

Heading into the 2018 season, both of those guys are healthy and poised for strong seasons on the mound, while Sam Towery will also be back after stepping into a big role because of those injuries last year.

Towery went 7-3 a season ago with a 2.817 ERA and 41 strikeouts. Case ended the season with an overall record of 2-3 with an ERA of .963 and 40 strikeouts, all of which was accumulated in the first half of the season.

Another guy that Stallings is high on as a big righty on the mound that returns is Riley Watkins. The talented senior totaled a record of 5-5 in 2017 and posted an ERA of 2.301 with a team-high 63 strikeouts.

“A lot of our guys are returning, especially a lot of pitchers and I think that gives them a lot of confidence based off of what they experienced last year,” Stallings said. “Aside from Connor Burnett, all of our pitchers are returning this season.”

Aside from the mound, Stallings has plenty of other guys to be excited about in the field and at the plate.

William Root is one of those guys that will be returning and will be key for this year’s squad. A trustworthy outfielder, Root batted .322 last season with an on base percentage of .414. He had nine doubles, two triples and 14 RBIs for the season.

He’ll be joined in the outfield by sophomore Carter Frederick, who as a youngster is already committed to Auburn University. Stallings said he is young but has a big arm and bat that can contribute.

He also said there are some guys still competing for rotation spots, but that it’s a good problem to have because of the amount of talent that is showing off in the preseason.

While the team has a lot of playmakers returning, Stallings said he needs to see this team prove they can be successful and sustain chemistry.

“I just have to reiterate that they have to prove themselves on the field,” he said. “I’m excited to see what their identity is about. I know all of these things about them, but still have to see them prove it in a game.

“Team chemistry has to be able to sustain itself through the ups and downs of the season. Teams that can do that are the teams that are playing in May and that’s our goal.”

Stallings said it will be a tough path in 2017 with Pelham improving and Helena always being loaded. He said the season is basically going to come down to three or four games in area play, but that the schedule they play leading up to area play will have them prepared for those difficult must-win games.

“As a coach I’m excited to get going with them because it’s a high energy group that’s exciting to be around,” Stallings said.

Bulldogs run away from Wildcats on Senior Night

By SETH HAGAN | For the Reporter MONTEVALLO – The Montevallo boys basketball team made sure to finish senior night... read more