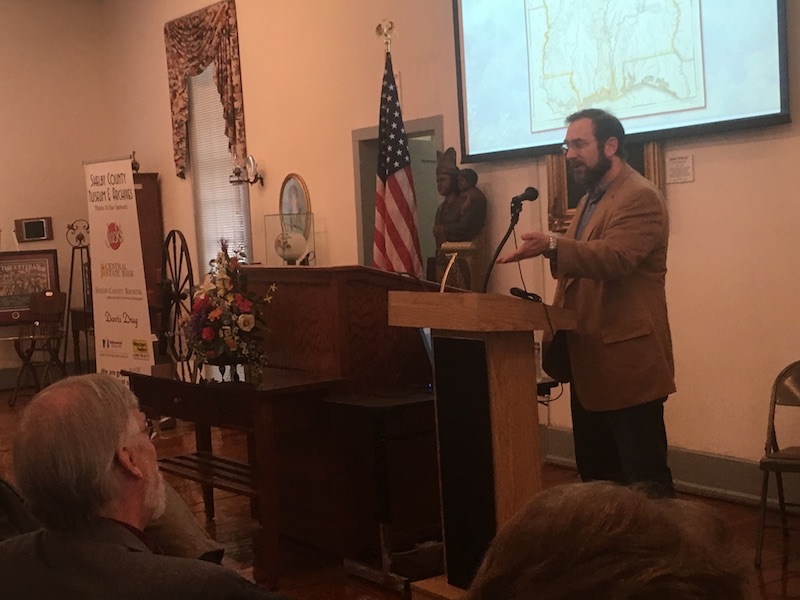 COLUMBIANA – To celebrate the bicentennials of both Shelby County and the state of Alabama, the Shelby County Historical Society hosted Alabama Humanities Foundation Bicentennial Scholar Mike Bunn at the county’s Museum and Archives on Sunday, Feb. 4.

Dozens of locals gathered to listen to Bunn’s presentation, entitled “From Territory to State: The Story of Early Alabama,” which covered the state’s history before the Antebellum Era.

“This is where the foundations of Alabama were laid,” Bunn said. “I feel that, for most people, this era is a little bit hazy. I think it’s important for us to take a look back at our beginning.”

During the presentation, Bunn discussed the Creek War, the 1,000-percent population increase in the state in the 1810s and the division of the Mississippi Territory into the states of Mississippi and Alabama.

While many books and movies set in Alabama focus on the Antebellum Era and the Civil War, Shelby County Museum and Archives Director Jennifer Maier said the stories of the state’s first settlers and leaders also deserve to be recognized.

“I think that later time periods are often romanticized, but it’s the unglamorous hard work of the first 20 years that set the stage for all of that,” Maier said.

Shelby County began as a part of the Mississippi Territory, was first settled in 1814, officially founded on Feb. 7, 1818 and was named for Revolutionary War hero Isaac Shelby, according to the county’s Historical Society.

“Shelby County’s story on how it developed is so similar to other counties,” Bunn said. “It started out with such a small population and grew from there.”

Maier said Bunn’s presentation was the first of several events the Museum and Archives have planned throughout the year that will focus on the state’s bicentennial. For more information about the Shelby County Museum and Archives and its future events, visit Shelbycountymuseum.com.