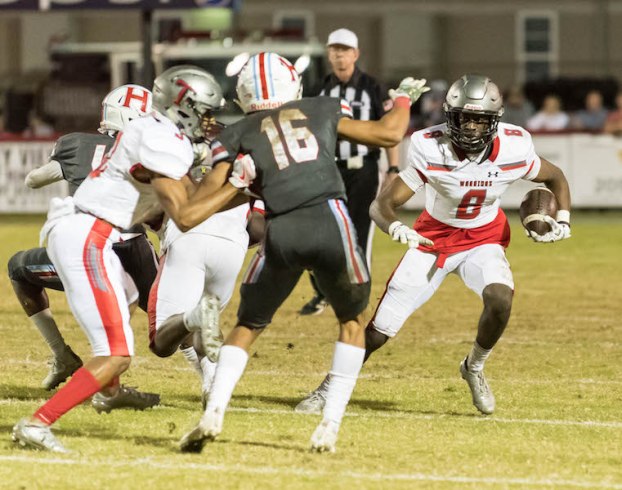 Mo Edwards officially announced that he had committed to South Alabama on his Twitter account on Sunday, Feb. 4. (Reporter photo/Neal Wagner)

ALABASTER – As part of one of the most historic football seasons in Thompson High School history, Jalen Rayam, Mo Edwards and Myles Brown all had a major part in leading the Warriors to a semifinal appearance in the state playoffs and have officially committed to three in-state schools.

With just three days until National Signing Day, all three All-County players made their post high school decisions by announcing which college they plan to attend, and all three chose significant in-state programs that are on the rise.

In 2017, the Warriors beat Hoover for the first time in school history; finished perfect in what many consider to be the toughest region in the state to take its first region championship since 1997; grabbed their first playoff berth since 2007; and made it to the second round of the playoffs for the first time since 1987.

All of those incredible accomplishments led to Thompson’s best season on the gridiron since 1982 and those three were a key part on their respective side of the ball.

Rayam was one of the best linebackers in the state and was close to being the leading tackler at the position in the state as well.

He had an unbelievable 143 total tackles in 2017, including 28 tackles for loss and 7.5 sacks, while tying for the team lead with Brown with four interceptions.

Brown had an incredible senior season totaling 96 tackles in the secondary, including five tackles for loss, which gave him an average of 7.4 tackles per game. He also tied for the team lead with Rayam by posting four interceptions.

UAB, Jacksonville State and South Alabama are on the rise in the sport of football and these three are hoping to help keep that trend alive.

The Blazers, who disbanded their football program in 2014, regrouped for their first season of football since in 2017 and had a historical season going 8-5, which gave head coach Bill Clark several Coach of the Year awards.

The Gamecocks have won at least 10 games each of the last five, including 11 in 2013 and 13 in 2015. Brown will look to make an impact on a team that contends for championships every season.

While the Jaguars have had the tougher seasons of the three schools in recent years, they have a new coach in Steve Campbell, who brings a strong track record to the table and is getting several good recruits that are flying under the radar.

While it will be a different Thompson team in 2018 without these three superstars gracing the field, the three athletes will carry the lessons learned with the Warriors with them on their new journeys.