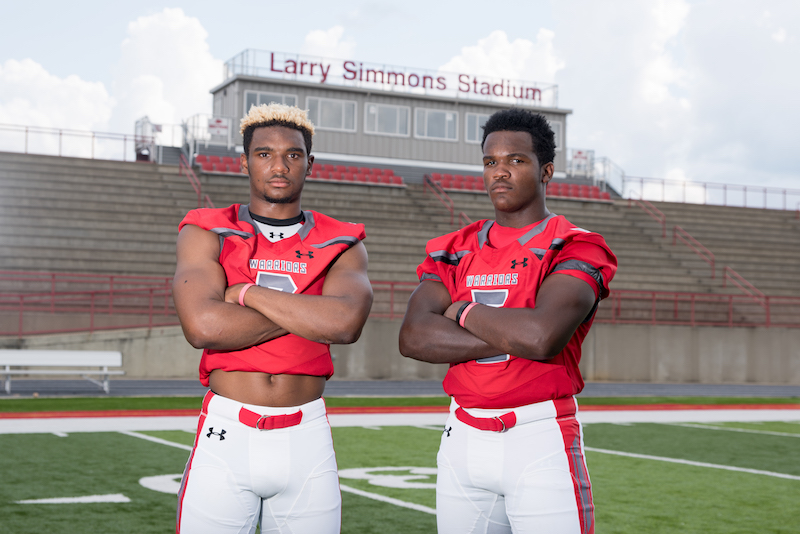 Since the fourth grade, Jalen Rayam and KJ Robertson have been able to look over and see one another’s face on the same football field. Both have been playing the game since they were young kids, Rayam at age four and Robertson at age six, thanks to fathers that were extremely involved in football.

When they first crossed paths close to nine years ago, the two linebackers had no clue this day would come, a day where they would become more than just friends, but brothers on and off the football field – brothers that for the final time will be able to take the field and look to their left or right in the middle of the defense and see that trustworthy face that instantly calms the other’s nerves as they prepare for their senior season as a Thompson Warrior.

“We’ve always been close since that first day of playing together,” Robertson said. “We automatically became friends and it just grew from there, from all the way through middle school to our first varsity game freshman year, it’s just always been like a brotherhood with everything we’ve been through together.”

Rayam is the son of former Alabama offensive lineman Thomas Rayam – who blocked a last-second field goal against Penn State in 1989 to preserve a 17-16 win – and also has two siblings Madison – who is headed to Jacksonville University on a volleyball scholarship – and T.J. Rayam – who just signed to play football at Boston College – which just goes to show the athleticism that runs in his family.

A lot of that has to do with his dad’s success on the gridiron and from a very young age, Jalen fell in love with the game. At the age of four, he didn’t really know what was going on, but just being around the game so much gave him the burning desire to play like his dad.

“Playing at the highest level in the NFL, he just kept me one step ahead of everything because of all of the tips and pointers he was there to give me. Anytime he would see something that wasn’t right, he would call me over and tell me how to correct it,” Rayam said chuckling. “I remember at the age of four, I was already practicing how to perfect the swim move.”

Robertson’s father also played an important role in introducing him to the game when he was younger. A coach at Illinois for a long time during Robertson’s childhood, KJ became extremely interested in the game, especially being around all of the college athletes on a regular basis.

“I was always going up there to practices and games,” Robertson said. “The energy of it always interested me the most and that’s why I immediately wanted to start playing.”

The two played all over the field growing up, but always by each other’s side and inseparable.

In 2014, the two settled naturally into their linebacker position at the high school level for the first time and fell in love. Now, for the past four years, they have been a nightmare for opposing backfields at the position.

“I like being in the middle of everything and seeing everything in front of me,” Rayam said of the position. “I don’t have to ask anybody else what my assignment is because I’m supposed to be the one that knows the assignment. I just love the control you get at linebacker.”

While Rayam can play both inside and out, he tends to be a solid anchor of force in the middle of the linebacking corps, while Robertson handles the outside.

“Being at outside linebacker, you can be at different places at different times,” Robertson said. “One snap you’ll be on the line rushing the passer and on the next snap you’ll be covering a slot receiver man-to-man or even in a zone. It just gives you a great flexibility to be all over the place.”

While both enjoy being all over the defensive side of the ball and bring back some remarkable stats, including Rayam’s 125 tackles, second on the team, and 15 tackles for loss, third on the team, there’s one particular feeling that gives both standouts an extra boost of adrenaline – sacking the quarterback.

When asked if they enjoyed the feeling of sacking the quarterback or bringing down a running back barreling their way, both got giddy with excitement barely being able to stay seated in their chairs, looked at each other with a grin before a chuckle was let out and both said, “sacking the quarterback.”

“Sacking the quarterback is just such a gratifying feeling, just like ‘Yes, I got him!” Rayam said, still grinning ear-to-ear. “It’s more satisfying because quarterbacks are usually more protected, so when you hit him it just gives you the best feeling.”

Before Rayam could even finish answering the question, Robertson was chomping at the bit to chime in and eventually blurted out with a smirk, “I love the face the offensive line makes when they’re like ‘Oh snap, we just let that happen.’”

While they settled into their positions quickly as freshmen players on the varsity squad in 2014, it didn’t necessarily mean they were fully committed or bought in, and as freshmen with a lot of growing left to do, that’s somewhat understandable.

Thompson went through the lowest of lows that year, and it was easily the biggest disappointment in both player’s career as the Warriors went a dreary 0-10 that season. It’s something neither likes to talk about as they both drop their heads into their hands and just shake it in disbelief of the season before letting out another laugh, knowing that’s all they can do at this point.

“We weren’t a real team that 0-10 season,” Robertson said. “Everybody just wanted to do their own thing and there was no leadership, which was the biggest thing.”

“My first varsity game, I was 13 years old,” Rayam said. “I’m younger than just about everybody in my grade so I didn’t really know what leadership was yet, so I had to grow really quick.

“I remember a few times my freshman year where I just didn’t want to go to workouts so I would stay home instead.”

While they realized they had to step up as leaders during their sophomore year, they were also greeted with the presence of new head coach Mark Freeman, who wasn’t going to let that same behavior fly moving forward.

“The first day they got in, the coaches told us ‘You aren’t missing workouts no matter what and we just got in that habit,” Rayam said.

“They’re watching everything you do, so you have to do every rep and you’re drenched after workouts, which wasn’t even heard of our freshman year,” Robertson said.

Going into their sophomore season, both guys knew their leadership skills had to immediately improve, which they drastically did. In 2015, the team made leaps the size of a giant going 5-5 overall and improving their defensive points per game from 35.5 to 20.6 in the process.

While their record stood at 5-5 again in 2016, the defense continued to improve lowering their average points per game to an impressive nine. Three of those five losses came by three points or less showing the progress made was light years ahead of their 2014 team.

Now the two head into their final season – after all of the ups and downs over the last four years – and with the core of that strong defense back as well as a much better offense, these two seniors feel as if this is the year they finally end a playoff drought that extends bck to Nov. 17, 2006.

Both Rayam and Robertson have grown tremendously over the last four years in not only their understanding of the game, but their leadership roles, which has them primed to lead this team to a run at history in their final season.

“We have a lot of trust each other so much at this point,” Rayam said. “We don’t even have a certain side of the field, I’ll just ask before the snap, ‘Hey KJ, what side of the field do you want?’ I trust him that he can do his job and I can do mine. It’s truly a unique relationship.”

It’s a relationship that doesn’t just have the two senior leaders buying in, but the entire defense and team more confident because of that trust and leadership role they display.

“We’re not letting anybody slack off because any play in a game can be that game changer, so we have to keep our discipline and stay focused on the goal,” Rayam said.

“Body language,” Robertson added quickly after. “If me or Jalen are down, that’s bringing at least three or four other guys down as well. If we can keep our energy up the rest of the team will want to feed off of that and be better even if a play doesn’t go our way.”

Whether it be taking to the football field together since the fourth grade or challenging each other to a game of Madden, Jalen Rayam and KJ Robertson are the ultimate competitors and have no other objective than to make their final season of “brotherhood” on the same team the best one they have had in their nine years together.

Update: Robertson, who had been committed to Troy University for a while will be taking to the field next fall for the Trojans, while Jalen Rayam officially committed to the University of Alabama at Birmingham on Monday, Feb. 5.

The two may be separating to different in-state schools, but their friendship will remain intact and there is no doubting each will be calling the other as soon as their first game comes to an end. 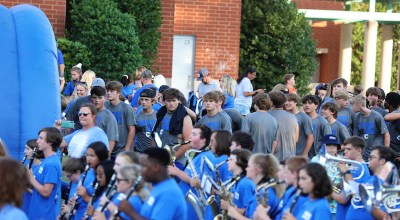