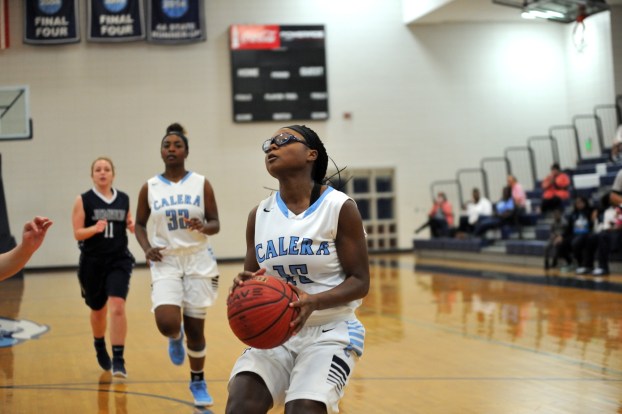 Calera's girls basketball team was able to pick up a dominant win over Jemison on Monday, Feb. 5, to clinch a spot in the Sub-Regional round of playoffs. (For the Reporter/Larry Dancy)

CALERA – Calera had played 29 games throughout the 2017-18 girls basketball season, but on Monday, Feb. 5, it came down to one game as the Eagles looked to not only clinch a spot in the championship of the Class 5A, Area 6 tournament, but also clinch a spot in the Sub-Regional round of the playoffs.

Sitting at 17-12, the Eagles had won the regular season area championship and were set to face the Jemison Panthers for the third time this year after pulling away for dominant wins in the first two matchups.

For the third time in as many games, Calera dominated from start to finish on both ends of the floor to pick up a 59-12 win and easily keep its season alive.

Thanks to four different scorers in the opening quarter, the Eagles were able put up 14 points, but in what became a trend throughout the game, it was the defense that shined for Calera.

In the first eight minutes of the contest, the Eagles held Jemison to just one made 3-pointer and no other points to take a commanding 14-3 lead out of the gate. A large reason for the success in the first quarter was Makaila Amos’ six points.

The second quarter was almost identical as the Eagles had five more scorers, three of which didn’t score in the first quarter to give them seven different scorers through two periods of play.

The impressive start gave Calera a 26-6 lead heading into the halftime break.

While the first half was impressive enough, it was just the beginning of the dominant performance by the Eagles as they actually improved in the second half.

It started in the third quarter as a defense that had given up just six combined points in 16 minutes of action continued its lockdown pressure to force a scoreless quarter from Jemison.

The Eagles’ offense had its best quarter to that point as well thanks to the third consecutive quarter with four or more scorers. This time three of those four had at least four points to lead the way.

While Calera gave up its most points in any quarter in the final period of play, the Eagles also scored their most points of the four quarters played.

Holding a 42-6 lead heading into the quarter, hey were able to put up 17 more points and limited Jemison to just six points in the quarter to preserve the 59-12 win.

Calera was led by Davis with 14 points, all of which came in the first three quarters of the game. Behind her effort, 11 total players scored in the contest for the Eagles. Of those 11, seven had at least four points in the contest.

The Eagles have automatically locked up a berth in the Sub-Regionals and whether or not they host will be determined by a win or loss in the area tournament championship game.

By ALEC ETHEREDGE | Sports Editor BIRMINGHAM – What has been an impressive season for several different local runners in... read more