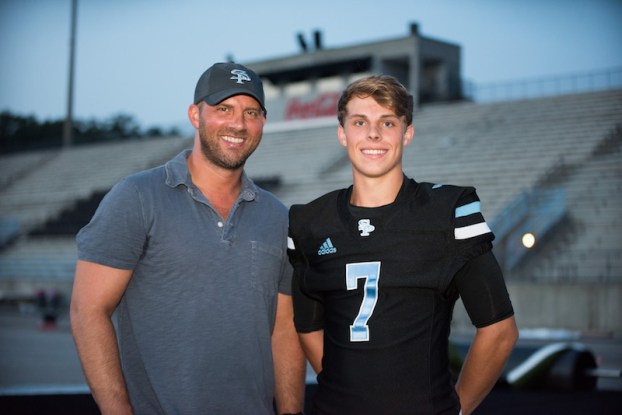 Braxton Barker stands next to his dad Jay Barker before the 2017 football season kicked off. Now Braxton will be headed to the University of Alabama, where his dad won a National Championship in 1992. (Reporter photo/Keith McCoy)

Creating his own legacy: Braxton Barker headed to Alabama

Like father, like son is a saying as old as time, but for Braxton Barker, it’s much more than just a saying created in the 1300s. Those four little words are something he considers a blessing.

While he isn’t living in his father’s shadow, nor does he want to burst out and take any of the limelight away from his teammates, Braxton is about to embark on the journey of a lifetime — a senior year with 95 of his best “friends.”

That word “friend” specifically is something that Braxton uses quite a bit on the football field. Not to talk with his handful of best friends that just happen to be on the team as well, but to talk about the entire team he has bled and sweated through the summer with in preparation for his final season of cool, crisp fall Friday nights under the lights.

“Everyone is friends on the team, there’s not really any separation, just one big family,” Braxton said. “It’s my senior year and I get to go out there and play with my friends and enjoy it and hopefully make a run at it one last time, it doesn’t get much better than that.”

The quarterback position is one that Braxton has dreamed of playing at this level and even higher since he was a young boy tossing the ball around in the back yard every day with his dad and siblings.

“Playing in the back yard with my brothers and dad is probably my first and best memory of the game,” Braxton said. “We were competitive, of course, but that was such a fun time with them and it helped me fall in love with the game extremely quickly.”

This family fun in the yard started when he was just three years old and from the very beginning you could see a passion burning in Braxton to play the game.

“I remember him being three years old out in the yard with his sibilings and they weren’t just throwing the ball around,” Jay said. “They would all lineup and run routes together.”

Whether it be his learning techniques from a young age or watching his dad’s old game films, Braxton clearly had a niche for the game and it showed as he went into his first year of flag football in the first grade.

“I wasn’t even signed up that year, my older brother was,” Braxton said. “I was just throwing around at practice one day with everybody and the coach asked me to come out and play with the team, which is how I got my start competitively.”

As to what position he would be committed to playing, there was never any question.

“I was always interested in playing quarterback because it’s what my dad did, so I always had an interest in it and knew it’s what I was going to do,” Braxton said. “I used to watch his ‘92 Florida game (SEC Championship) and ‘92 National Championship game against Miami and would try to do what he did because I wanted to be just like him.”

That father-son relationship is something a whole lot more than Braxton wanting to be like his dad, it’s something that they still cherish to this day and take advantage of on a daily basis.

“He’s had a big impact on my life,” Braxton said with clear sentiment in his voice. “To this day, we still watch film together of things they’re doing at the college and NFL level and also talk about different schemes. He really talks to me about being a leader and being able to deal with different pressures. Seeing him after games and talking through different things has meant more to me than the game of football itself.”

Helping Braxton become better and being there to offer advice is what Jay said he loves the most about their relationship.

“Braxton even thinks I’m crazy about how much of a film nerd I am,” he said letting out a chuckle. “We sit and watch practice and game tapes from NFL and other leagues, breaking down how to run routes and create the right opportunity. You can just find ways to make yourself a better quarterback and you might see something that you haven’t before that can help you find the open man.

“I’ve always told him that if he can teach it to Harrison, his younger brother, he can do anything because that shows a complete understanding of the game.”

It’s not just his dad that has helped him become a better and more competitive player, but his siblings like Harrison as well. Harrison, his younger brother and future quarterback with the Jags, Sarah Ashlee, his younger sister and star on the SP girls basketball team, and older brother Andrew, who played at Mountain Brook, all have had a part in helping as well.

“We always compete with each other playing things like 21 in basketball or even video games,” Braxton said before tossing a jab. “We’re just so competitive and hate to lose to each other, but it’s all good because I never lose.”

With a voice that showed an eye roll and laughter combined, Jay went on to add to Braxton’s statement saying his kids are more competitive than anybody he has ever seen, including himself.

While a lot of young athletes with parents that stood out themselves have an easier time getting recognition simply because of their name, Braxton has had to work harder than most and has hurdled a few obstacles he wasn’t going to let stand in his way.

Two games into his freshman year, Braxton’s arm started bothering him. It turned out he had little leaguer’s shoulder from throwing the ball so much during games over the past several years leading up to that 2014 season.

Doctors told him he was lucky because a few more throws would have caused a much more severe injury and would have at the least required surgery if not ended his career. He ended up not needing surgery, but the recovery process was a long one.

That spring of his freshman year, he moved up to the varsity team, but still couldn’t throw and was on a program throughout the summer and the next season to get back to full health.

“A little bit of doubt definitely creeped into my mind but I just kept working and praying that Gods plan would work out the way it was meant to,” Braxton said.

That work he put in made the desire to get back on the football field greater than any desire he had experienced at any point in life thus far.

“You could tell it was eating at him because he just wanted to get back in the back yard and throw 10 passes like he did when he was a kid,” Jay said.

He was finally able to get back to full strength, and really stronger than he was before the injury as he was finally growing into his body, during the summer of 2016 heading into his junior season.

Braxton was locked in a quarterback competition with Hunter Howell at the time, who went on to be named the starter at the end of fall practice because the coaching staff felt like there were still a few things for him to work on.

“I just wanted to play because the injury gave me a new and energized love for the game that I had never had before now that I know it can be taken away from me so quickly,” Braxton said.

He put in the work and slowly started earning more respect from the coaching staff throughout the season and correcting things he still needed to work on.

“I thought he handled the competition of being beat out by Hunter last summer really well and he made the decision to work harder,” Jaguar head coach Shawn Raney said. “He really progressed throughout the season and did everything we needed him too.”

By the ninth game of the regular season, Braxton had earned enough respect from the coaches to take over the starting job on a team competing for a playoff spot. He went 2-1 as the starter with an area win over Oak Mountain as well as a win over Minor before falling to James Clemens in the first round of the playoffs.

Now Braxton has strong game experience as a starter and is heading into his senior year looking to take help lead his “friends” to the finish they deserve.

Just like his dad, he will be heading into his senior year as a starter at quarterback for the first time and will look to wow people all over the country in similar fashion.

While Jay says watching his son is more nerve wracking than competing for a national championship, Braxton feels calm and confident, not solely in himself, but his team that this year will be a special one for the Jags.

Update: Braxton officially committed to the University of Alabama on Monday, Feb. 6. While many will say he is following in his father’s footsteps, Braxton is actually following his dreams.

His dad, his brothers and sisters, his entire family and his strong group of friends on and off the field have all helped him get to this point of actually living out his dream, but his hard work and dedication through the adversity of injury and other obstacles is what will carry him to Alabama and beyond.

By ALEC ETHEREDGE | Sports Editor Since the fourth grade, Jalen Rayam and KJ Robertson have been able to look... read more